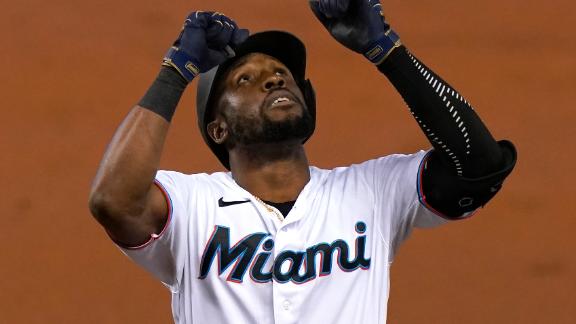 MIAMI -- The Marlins still have never lost a Game 7.

Pablo Lopez allowed one run in seven innings with the help of flashy defense by right fielder Matt Joyce, and the upstart Marlins won the finale of their marathon seven-game series against Philadelphia on Monday, 6-2.


The series, the majors' longest in the regular season in 53 years, included three makeup games and two doubleheaders. The Marlins' only other Game 7s were in the 1997 and 2003 postseasons, and they won the World Series both years.

"For Game 7 you have in your mind a lot more fans and more energy, but these were huge games for us," Joyce said. "We played really well, and we're excited to be in the position we're in."

Marlins Park was mostly empty because of the coronavirus, but the home team still created some buzz by winning five of seven from Philadelphia, including the final three in the series.

The Marlins (24-21) moved into second place in the NL East, 1 1/2 games ahead of the Phils, and have a shot at their first playoff berth in 17 years after overcoming an early season COVID-19 outbreak that sidelined more than half the team.

"We're just kind of doing what we believed we could do," manager Don Mattingly said. "Before the season, nationally nobody was thinking about the Marlins at all, but we felt pretty good about ourselves."

Lopez (4-4) bounced back from his worst outing of the year by allowing only three hits and retiring his final 13 batters. He was helped by not one but two over-the-shoulder basket catches on the warning track by a retreating Joyce, who robbed Scott Kingery and Jean Segura.

"Way more fun if you catch those, right?" Joyce said. "Definitely that football feel. The Phillies' bullpen was giving me a hard time -- I said it was a touchdown, and they said I didn't keep my feet in. Got to go to the replay."

"It's always frustrating when you're not scoring runs," manager Joe Girardi said. "We hit the ball hard; just didn't have any runs to show for it."

Jesus Aguilar put the Marlins ahead with a two-run double in the third. Miguel Rojas hit his third home run and Starling Marte added his fifth, both off David Phelps.

Kingery, reinstated from the injured list before the game, hit his second homer. Phils catcher Rafael Marchan made his major league debut and went 1 for 3.

Phillies: 1B Hoskins (left wrist) will go on the 10-day injured list but might play again this season. Realmuto has a mild strain of the left hip flexor, and he'll likely miss a couple more days. "As long as I keep progressing like I did today, it shouldn't be too long," Realmuto said. ... RHP Zack Wheeler (finger) threw a bullpen session before the game. Barring a setback, he'll start in the upcoming series against the New York Mets.


Marlins: 2B Isan Diaz left the game in the fourth inning with a tight left groin. Mattingly said the move was precautionary, and Diaz's status is day to day.

Phillies: RHP Jake Arrieta (3-4, 5.54 ERA) is scheduled to start when the Phillies return home Tuesday to face the Mets.

Marlins: Continue their 15-game homestand with a three-game series against Boston. RHP Sandy Alcantara (2-1, 3.97 ERA) is scheduled to start Tuesday.