'No Catcalling' signs will come down in New York City 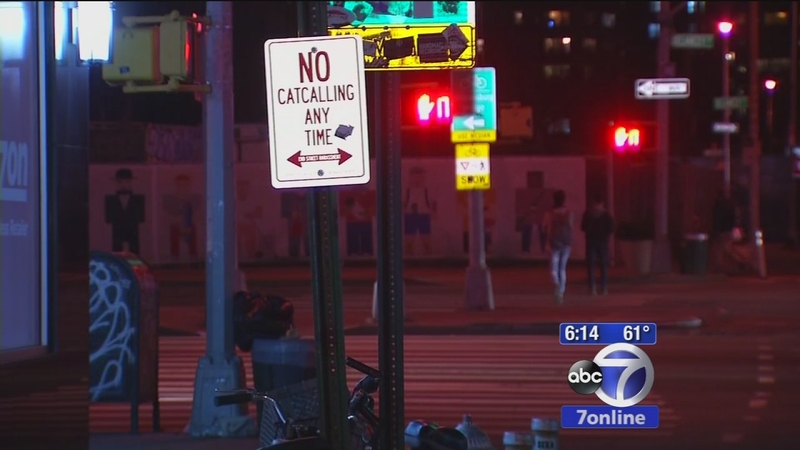 'No Catcalling' signs to come down in New York City

NEW YORK CITY -- There's a new campaign to end the harassment of women, and the signs of it are everywhere, but they will soon be coming down.

The city says they're illegal, but women who spoke to Eyewitness News called them a welcome addition.

"Oh my goodness, they do it all the time," one woman said.

"Here and there, yeah," another added. "And it's always kind of freaky."

Catcalling is a blatant form of harassment that many turn a blind eye to every day, but now, several feminist groups are screaming that enough is enough.

A non-profit clothing company called Feminist Apparel placed the signs, hoping they would help combat the ongoing problem and push this issue to the forefront.

"It kind of makes you feel like an object instead of a person, you know what I mean?" one woman said. "It's like, you don't know who I am, so why would you say that to me?"

"It makes me so uncomfortable," another catcalling victims said. "I feel like over the years it's become a little bit more disrespectful."

The non-profit Hollaback! says the signs carry an important message.

"Street harassment is something that has been normalized over time, and when we talk about street harassment, we're talking about verbal harassment and catcalling, but also non-verbal gestures," Hollaback! deputy director Debjani Roy said. "The signs are a very interesting way to approach the subject. Public art is really important in raising awareness."

In fact, a new study by Hollaback! and Cornell University showed that 85 percent of women will experience street harassment before the age of 17.

"It causes a lot of anxiety, fear, depression," Roy said. "And if it's something that happens on a regular basis, and with other forms of gender-based violence like domestic violence or other forms of sexual assault, then the trauma is just multiplied."

Roy supports the new signs being posted throughout the five boroughs in conjunction with Anti-Street Harassment Week.

"I think it's drawn a lot of positive attention, and I think it's sort of stopping people in their tracks,' Roy said. "Because it looks just like a regular sign, and then they're like, wait a minute, no cat calling zone, what does this mean?"

More than 50 signs had gone up, and organizers planned to have them in every borough by the end of the week.

"Anything that has to do with women empowerment, I think should be talked about," Jilayna Burton said. "And it should be out there, because it's getting kind of crazy and disrespectful. And I don't think women should deserve that. It makes them have a low self esteem."

Unfortunately for supporters, the city's Department of Transportation is actively removing the signs.