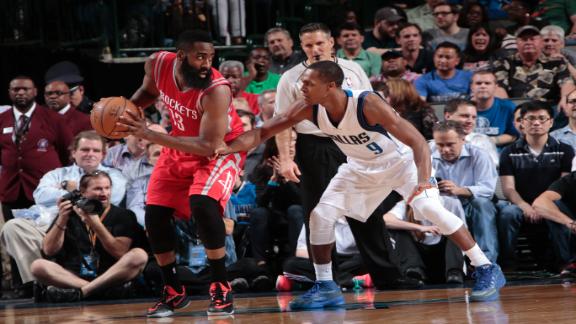 ESPN
By Tim MacMahon
DALLAS -- Mavericks small forward Chandler Parsons plans to play in Saturday night's series opener against the Houston Rockets after missing the final six games of the regular season due to a sore right knee.


Parsons practiced Friday for the first time since leaving an April 2 loss to the Rockets in the third quarter, a few days after originally injuring his knee.


"I definitely feel much better today," said Parsons, the Mavs' third-leading scorer at 15.7 points per game. "I was able to get through everything and went up and down and did all the contact stuff. I definitely made a lot of progress from the last couple of days until now. I'm feeling much better. Hopefully, no setback from now until tomorrow, but if all goes well, I should play."


Mavs guard Devin Harris, one of the team's top reserves, also fully participated in Friday's practice and is expected to play in Game 1. He missed the final game of the regular season due to turf toe in the big toe on his left foot.


Parsons, who has attempted to downplay the storyline of facing his former team in the first round after leaving the Rockets as a restricted free agent last summer, hoped to play in at least one of the seventh-seeded Mavs' final two games of the regular season to chip off some rust and establish a rhythm before the playoffs began. However, he suffered a setback in an intense pregame workout Sunday, preventing him from doing any contact work until Friday.


Parsons said his minutes might need to be managed more closely than normal to start the series, but he didn't feel rusty during Friday's practice.


"I actually felt fine," Parsons said. "My conditioning is a little suspect, but if you miss two weeks, you're going to have a little setback. I've been doing a lot of extra work, did a lot of extra shooting yesterday, a lot of extra running today. With the adrenaline and the atmosphere tomorrow night, I shouldn't have a problem."