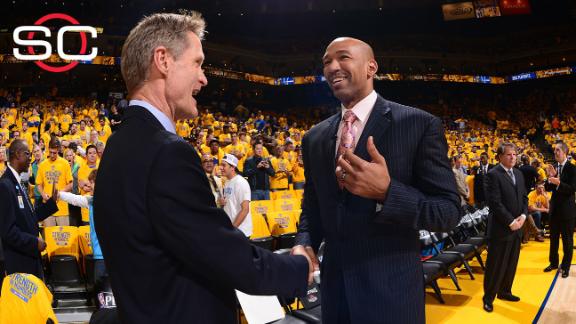 Speaking before Game 2 against the Golden State Warriors, New Orleans Pelicans coach Monty Williams claimed his comments Monday morning regarding Oracle Arena's crowd noise were taken out of context and meant only as a joke.


"I hope it was taken tongue-in-cheek, but I understand how things get taken out of context at times," Williams said ahead of the Pelicans' 97-87 loss. "I take full responsibility for that. I'm not going to blame anybody for taking it out of context. That's just me."


Williams said earlier Monday that he was "serious" when he said he wasn't sure that the decibel level at Oracle Arena in Game 1 was "legal" under NBA rules.


Williams' comments Monday morning indicated that the NBA's competition committee, of which he is a member, had discussed decibel levels in NBA arenas. When asked for a follow-up pregame, Williams said he was not insinuating that Golden State was taking part in any foul play with artificial noise.


"We didn't do anything with it; it's just something that comes up," Williams said. "Certainly we believe that Golden State is not part of that equation. There's probably some football teams that have had some issues with that, but I don't think any basketball teams have had any issues. On the competition committee, we talk about a lot of things."


"It's definitely a different level, a different atmosphere," Pelicans star Anthony Davis said of Oracle Arena. "It's so loud I can't hear my teammates or my coaches."


Warriors guard Klay Thompson and forward Andre Iguodala said at shootaround Monday that they have heard the arena louder than it was Saturday afternoon. They said it typically is louder for night games.


The Warriors hold a 2-0 lead in the best-of-seven series after Monday's win.