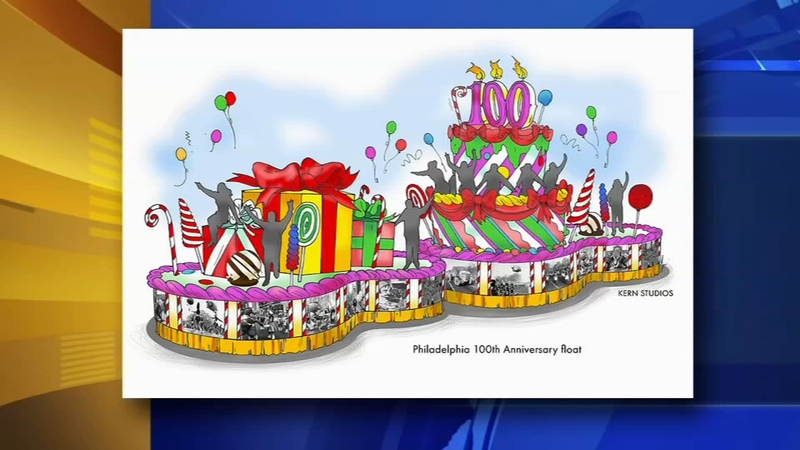 Southwest Philadelphia (WPVI) -- There are only 27 more days until the 100th 6abc, Dunkin' Thanksgiving Day Parade.

To mark this milestone, there's a very special float in the works.

Right now, in what they call the parade float "den" in Southwest Philadelphia, the custom, brand new 100th float is being built by hand, from scratch.

"100 being the theme, the float is actually going to be 100 feet long," says John Best, the Supervising Producer of the 6abc, Dunkin Thanksgiving Day Parade. "It has a massive birthday cake that is about probably seven or eight feet tall."

And because it's a party 100 years in the making it will also feature lots of presents and fanfare, and nostalgia.

"The unique thing is, is the bottom of both of the sections of the float are going to have photographs from the last hundred years from our parade," Best says.

Barry Kern is the brainchild and builder of every float in our storied parade.

You can say he was born into this.

"I build floats all over," says Kern. "I'm third generation and my son is the 4th generation of float builders."
And Kern knows, there's just something about a parade that connects a community in the most pure and spirited way.

"A parade cannot be replaced by social media," he says. "It's an experience that you have to go to."

In the warehouse, or "den," is housed the whole fleet of 14 floats that will roll down the parkway to smiles and cheers this Thanksgiving morning.

"This parade is really the fabric of Philadelphia," says Best. "We're really excited and actually, we're honored to be able to