Fabric Workshop and Museum: The Confederate Flag of Truce 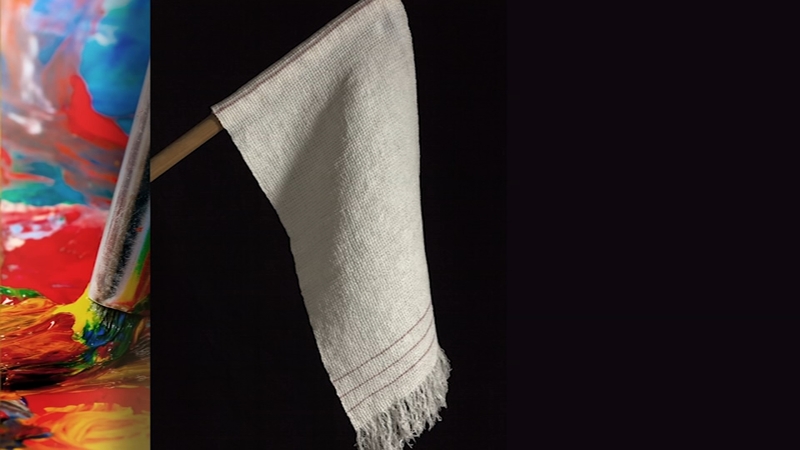 The Fabric Museum and Workshop has a new exhibit focused on the little known artifact, from one of the most tumultuous times in our country's history. The exhibition is titled Monumental Cloth, the Flag We Should Know. It was the vision of local artist Sonya Clark.

"Sonya has been working for many years on art that addresses issues of race and history," says Susan Talbott, Executive Director.

Her recent work led her to the discovery of the Confederate Flag of Truce. Half of the flag is housed at the Smithsonian National Museum of American History. The other half is at Appomattox, where the surrender took place.

"So many didn't know about it. The flag really isn't a flag, it's a dish towel that was repurposed to be the flag of truce," says Talbott.

The exhibition is divided in two parts; the first invites viewers to explore the flag's symbolism.

"What if this little flag was blown up to the size of the stars and stripes? And that was the idea that Sonya started with," says Talbott. "Instead, we shrunk it to a still gigantic size of 15 feet by 30 feet."

"I think it's very, very important for children to learn about this facet of the civil war and of our history," says Talbott.

"At the end of this project we're going to have nine flags or more that were woven on these nine looms by many many people," Talbott says. "You almost take ownership of it. You become a part of that peace process."

For the show's debut, Clark opened with a performance using the Confederate Flag to wash away dirt from the gallery floor. It unveiled a message she says is often forgotten.

"The preamble to the Declaration of Independence. That starts out: "We hold these truths to be self-evident, that all men are created equal," says Talbott. "Symbols that could be symbols of pride to one group of people, are symbols of pain and anguish to another group of people."