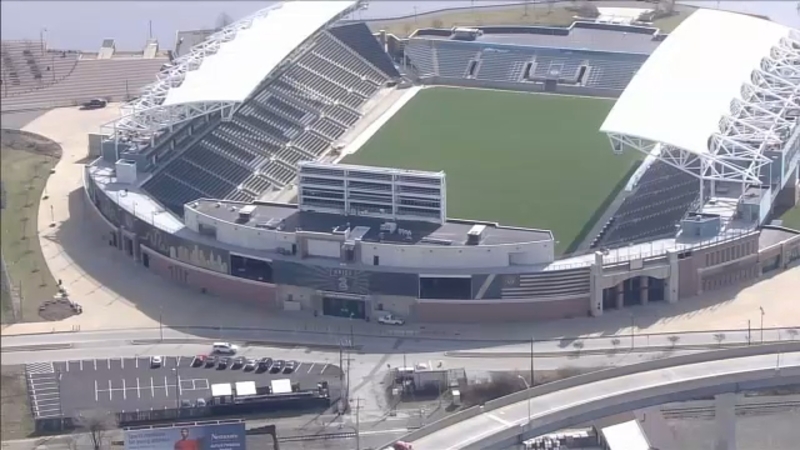 CHESTER, Pennsylvania (WPVI) -- A pop-up voter services center to be held at Subaru Park in Chester, Pa. will go on as planned starting Friday through Sunday.

Judge Spiros E. Angelos ruled in favor of the Delaware County Board of Elections after eight Republicans tried to file an injunction to stop the event.

The Delaware County Board of Elections planned on allowing residents to stop by Subaru Park, where they could register to vote and drop off their ballots.

"The limitations posed by COVID is a challenge because you have to have a large location, and you have to have a location where the private property owner is welcoming the public coming in and out as it occurs in this location," said Delaware County Solicitor William Martin.

Attorney Joel Frank of Lamb McErlane, representing the group of eight local Republicans, said in court that the Board of Elections violated the Sunshine Act, which requires public comment before a vote.

Frank said the DelCo board of elections didn't advertise the Subaru Park plan on their October 7 meeting agenda before they voted on it. As a result, they filed an emergency injunction to shut down the park plans.

"All they had to do was say what was going to be encountered at a specific meeting, give people the opportunity to comment whether they're in favor of it not in favor of it, whatever the case may be," said Frank. "They did not do that."

But representatives for the DelCo Board of Elections said pop up voter service centers were discussed at other meetings. They said the timing of the Republican court filing, just 19 days before the general election and the day before the Subaru Park event is set to start, were nothing but an act of voter suppression.

RELATED: Coverage of Vote 2020 at 6abc.com/Election

"Instead of working the street and pounding the pavement to get their voters to come out and vote this weekend, the Republican Party spent their money and their resources to drag the county through a court proceeding today to try to shut it down," said Martin.

Pennsylvania will be one of the deciding states between Democratic presidential candidate Joe Biden and Republican Donald Trump. Democrats are fighting for the suburbs.
"They have to squeeze out as many votes in Philadelphia and again, continue the blue trend in the suburbs to make up for the ground they're going to lose in the rest of the state," said Dr. John Kennedy, Political Science Professor at West Chester University.

Pennsylvania went for President Trump in the last election, and Republicans have made gains since then, adding more than 174,000 voters to their rolls.

But Democrats still hold the upper hand statewide, with a 711,000 voter advantage over the GOP.

Philadelphia, while still a Democratic stronghold, actually shifted slightly red, with a net gain of 8,800 Republicans.

After his order, the judge said the DelCo Board of Elections needed to come up with a plan for the ballots received at the event, in case Republicans win an appeal. Martin said they planned on segregating the ballots but said he is confident the Board of Elections will win in court.
Report a correction or typo
Related topics:
politicschestervote 20202020 presidential election
Copyright © 2021 WPVI-TV. All Rights Reserved.
TOP STORIES
Suspect fires shots at officers after deadly double shooting
Sources: Man confesses to killing girlfriend; body found near trail
Adam Sandler greets fans while filming movie: 'I love Philly'
Pennsylvania liquor board puts 2-bottle limit at state stores, bars
Down 7-0, Harper & Phillies rally to 17-8 win | See how it happened
Young girl shot multiple times while in vehicle near Delco store
Police searching for hit-and-run driver who struck 6-year-old girl
Show More
Police ID man killed in fight outside Pat's Steaks; 4 suspects sought
Must-see interview: Boy's act of kindness at Phillies game goes viral
Bialik, Jennings to guest-host 'Jeopardy!' for rest of year
New details emerge in shooting death of girl at football game
Driver facing charges after crashing into school bus
More TOP STORIES News