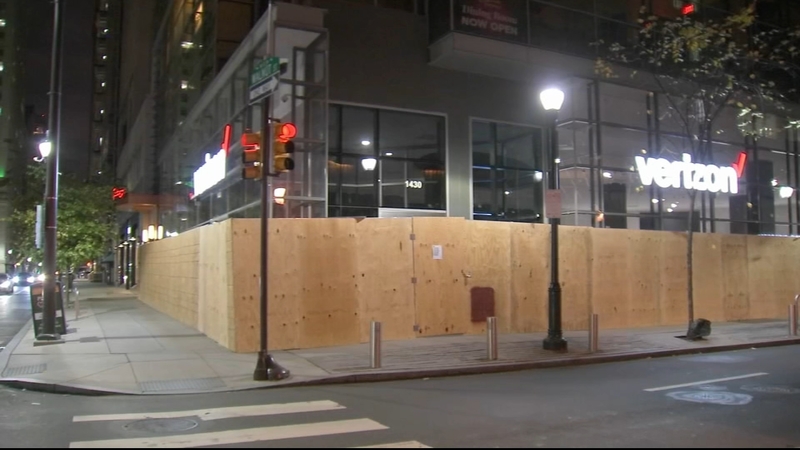 Philadelphia boarded up as city sets curfew to quell violence

PHILADELPHIA (WPVI) -- Philadelphia police pledged to release 911 tapes and police body camera footage "in the near future" in the shooting death of a Black man with a history of mental health problems, a death that prompted protests, widespread vandalism and an overnight curfew days before Election Day.

Police Commissioner Danielle Outlaw pledged to release the video evidence once the department shares it with the family of 27-year-old Walter Wallace Jr. Outlaw, who came to Philadelphia less than a year ago from Portland, Oregon, lamented at a news conference Wednesday that her department lacks a mental health unit or consistent way to coordinate police calls with specialists.

"We don't have a behavioral health unit, which is sorely needed," said Outlaw, when asked about reports that police had been called to the home twice before that day. "There's clearly a disconnect on our end in terms of knowing what's out there (at the scene)."

Police said they fatally shot Wallace on Monday after he ignored orders to drop a knife, a death that intensified already heightened tensions in the presidential battleground state. Wallace Jr.'s mother said she warned police Monday afternoon that her son was in the throes of a mental health crisis.

In the days since, more than 90 people have been arrested and about 50 police officers injured in clashes with protesters and vandals, including the 1,000 or so who suddenly swarmed a shopping center Tuesday night, breaking windows and stealing merchandise. That scene erupted on the other side of the city, miles from Wallace' neighborhood, where protests were underway.

"We had zero information to warn us of this," Deputy Commissioner Melvin Singleton said. "By that time, the damage was done."

Grocery stores, restaurants and pharmacies were allowed to operate only for delivery services after 9 p.m., but should have appropriate security measures in place.

On Wednesday, some business owners were left cleaning up damage, boarding up windows and doors, after people streamed into stores and stole goods in the city's Port Richmond section.

"I know that our city is still hurting. Philadelphians are rightfully feeling frustrated and outraged following Monday's tragic incident. But I'm also very disturbed by damage being done in our communities. The looting that is taking place in separate neighborhoods of Philadelphia is distressing to say the least, and it is unacceptable," he said.

"We will do everything we can to ensure the right to assemble and exercise free speech is protected, but we will not, repeat, not allow others to destroy property and further harm our communities."

Outlaw echoed those sentiments, saying the looting had absolutely nothing to do with protest.

"The widespread lawlessness, including the burglary and looting of area businesses serve no purposes whatsoever. These individuals are doing nothing, but simply wasting our precious resources. Let me be perfectly clear, this behavior is not acceptable, under any circumstance, nor will it ever be tolerating," she said.

Members of the Pennsylvania National Guard are slated to arrive in Philadelphia in the next few days to focus on guarding infrastructure, state and city officials said.

The proclamation authorizes state agencies to use all available resources and personnel, as necessary, to cope with the magnitude and severity of this emergency situation. The time-consuming bidding and contract procedures, as well as other formalities normally prescribed by law, are waived for the duration of the proclamation, according to a news release.

In addition, 23 officers were treated and released for injuries. Nine police vehicles were damaged and there were explosions at nine ATMs.

In all, police say there have been more than 170 arrests since Monday night and a total of 53 officers injured, one of whom remains in the hospital after being hit by a vehicle.

Wallace Jr.'s parents said Tuesday night that officers knew their son was in a mental health crisis because they had been to the family's house three times on Monday.

The video does not make it clear whether he was in fact holding a knife, but witnesses said he was.

Police officials said they could not confirm what information had been given to the responding officers, whether they were told about a possible mental illness or how many calls they had received for help at Wallace's address Monday.

Outlaw said earlier the officers involved in the shooting were taken off street duty as they investigate. She said the officers' names and other identifying information, including their race, would be withheld until the department could be sure releasing the information would not pose a threat to their safety.

Neither had a Taser or similar device at the time of the shooting, Outlaw said, noting the department had previously asked for funding to equip more officers with those devices.

The two officers each fired at least seven rounds - at least 14 total shots - but police could not say how many times Wallace was struck.

Wallace's father, Walter Wallace Sr. said Tuesday night that he is haunted by the way his son was "butchered."

On Wednesday, Outlaw said the department is working hard to ensure a thorough investigation.

"This investigation has many moving parts and we are working hard to ensure that a fair and thorough investigation takes place. We plan on releasing premise history audio of 911 calls and body cam footage of the discharging officers in the near future," she said.

"I'd like to acknowledge and thank our officers who continue to work long hours in extremely challenging circumstances in order to protect our communities. I also want to ensure the public that we are out here 24/7, and that public safety is our number one priority. We hear you and we share in your frustration," added Outlaw.

"We're confident that investigators will conduct an exhaustive and transparent review of all the facts related to this tragic incident," said McNesby. "We're calling on the city leadership to release the facts of this case, it's not hard. It's cut and dry, release what you have."

Lawyer Robert Trimble represented Wallace in a 2016 robbery case that led him to spend about a year in jail. His sentence, according to court records, included mental health supervision and six years of probation. He had a new charge pending at the time of his death.

"I ran into him about a year ago by City Hall. He stopped me on the street and thanked me for helping him," Trimble said. "I remember him being a decent guy."

Both Outlaw and the mayor pledged to address the lack of coordinated mental health services.

During Monday's unrest, police cars and dumpsters were set on fire as officers struggled to contain the crowds. More than a dozen officers, many with batons in hand, formed a line as they ran down 52nd Street, dispersing most of the crowd.

The nearby business district, known as the 52nd Street corridor, was also the site of protests against police brutality at the end of May after George Floyd was killed by Minneapolis police.