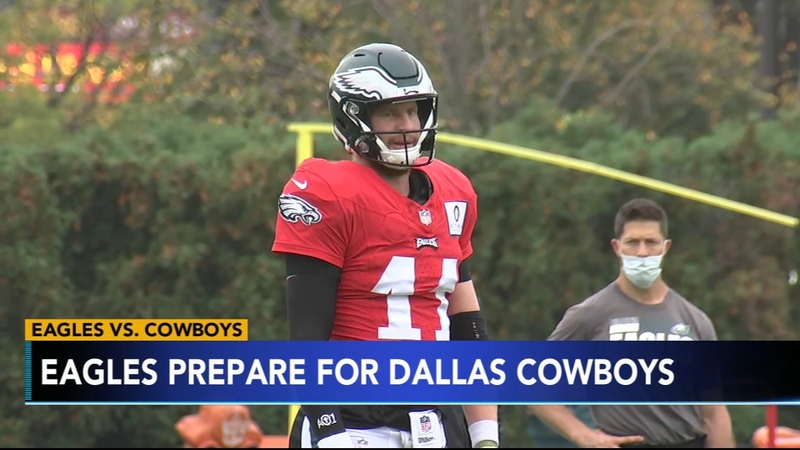 PHILADELPHIA (WPVI) -- "They don't like us, we don't like them," said defensive end Brandon Graham, summing the Eagles-Cowboys relationship.

Doug Pederson says he gets a little extra juice for these games.

"It's always a great week. It's an exciting week anytime you play any of our division opponents, division rivals. This is no different. We're on Sunday Night Football and we're excited again to be in the national spotlight, to be in another home game," said Pederson.

"We're feeding off hopefully a little bit of momentum from last Thursday, but it's something that you look at both teams and maybe there's not the same lust or excitement from the game. I remember back in '99 when I played here and I can think of the fans are always like, 'Hey there's two games every year that you really got to win, and it's the two Dallas games.' That's a part of the excitement this week."

Pederson and the Eagles are not the only ones excited about the matchup. The team that has been decimated by injuries to start the season is getting much healthier.

Reagor and Goedert are a sight for sore eyes for Wentz.

Wentz says Reagor can change a game for the offense in a heartbeat.

"He has run after catch ability. We see the explosiveness he can bring," Wentz said.

Protecting Wentz is key, too, for an offensive line that has had six different starting combinations in seven games.

Peters had a shot to return, but will he be returning to left tackle?

"I don't make the decision at the end of the day," Wentz said. "I know that Jason Peters has been doing this for a long time and he's been rock solid every time he's been in there. He's going to be, in my opinion, a future Hall of Famer, one of the best to do it."

Pederson, who does make the decision, would not divulge the plan for Peters.

"That's exciting for us to get him back this week and get him in the mix. Right now, I think it's just a matter of him just getting out there and feeling comfortable again with the offensive line. We haven't been real committal one way or the other, but he definitely can help us at left tackle, and he's had the right guard experience," said Pederson.

Even though the Eagles coach would not commit to where Peters would play if he returns Sunday against the Cowboys, early indications are that he would slide back to left tackle and Jordan Mailata would move to right tackle if Lane Johnson is not ready.

"Jordan (has) filled in nicely. He's done a great job, and I think that's a bright spot for us having seen him play and really play against some really good defensive ends or outside linebackers. We all know that Jason Peters feels comfortable at left tackle and he's a veteran player and if that's where we want to play him this week, even if he's available to play," Pederson said.

Johnson, who did not practice Wednesday with a lingering ankle injury, is pushing Pederson and the training staff to play.

"I'll let you take that up with Lane because that guy doesn't want to come off the field. You know he's tough. He's tough and still - I will mention this too with Jack Driscoll, he's getting close and we're going to see where he's at again. We have to be smart obviously as a medical staff and as coaches to not put a player in harm's way. If the player feels comfortable -- if Lane feels comfortable in playing and getting out there then listen, I'm not going to be the one that stands in his way," Pederson said.

Johnson was not the only Eagles player missing from practice Wednesday, among the others was Alshon Jeffery. While Jeffrey is good to go with his foot injury, now he is dealing with a calf injury that kept him out last week against the New York Giants and could keep him out again Sunday night.

Jeffery has yet to play this season and has been taking up a valuable roster spot all year.

"Sometimes you see it with guys that have one injury and then they come back and something happens to another part of their body. It is something that occurs, but when he's healthy, he'll be out there and ready to go," Pederson says of Jeffery's situation.

Eagles have a lot of time before they have to make roster decisions on the players who returned to practice on Wednesday.

While everyone wants to return against the Cowboys with the bye week coming up, the Eagles want to be smart.