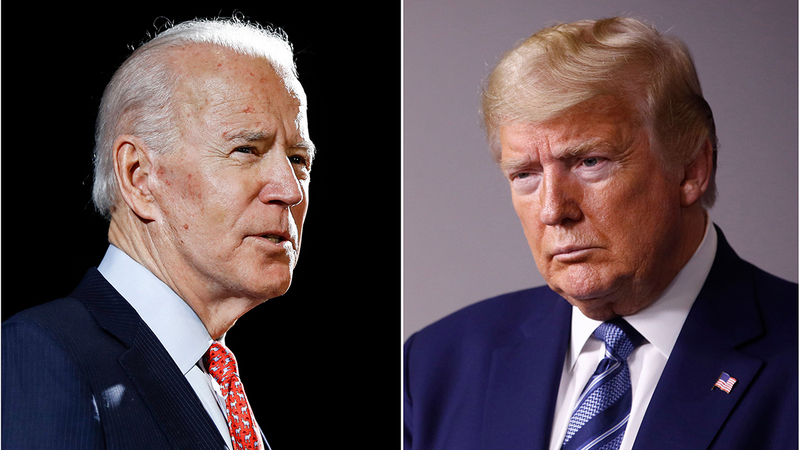 Candidates put in one last day of campaigning

PHILADELPHIA (WPVI) -- It is the final push for candidates in the battleground state of Pennsylvania ahead of the 2020 Election.

Instead, Joe Biden's running mate is referring to him as "you know who" or "the other guy."

She told a crowd in Bethlehem, Pennsylvania, on Monday: "I'm kinda done talking about the guy in the White House. If y'all don't mind, I'm just gonna talk about Joe."

Any issues that may arise at Philadelphia polling places tomorrow will be addressed by a number of task forces ready to take on the job of combatting voter suppression.

The event was billed as a get-out-the-vote rally focused on Latinos, who make up roughly 30% of the city's population. Harris largely stuck to her standard campaign speech, highlighting the differences between Trump and Biden.

She says Biden understands hard work, determination and faith can get people through difficult times. She says, "He believes in the American people, and he believes in the strength of who we are as a nation."

In Philadelphia, Democratic Mayor Jim Kenney kicked off a stadium car rally with Harris on a brisk Election Day eve.

Kenney told people listening from their cars outside Citizen Bank Park on Monday that the country needs "a strong, sound and sane president in the White House."

"I know that tomorrow we are going to elect Joe Biden the next president of the United States of America," Harris told the crowd of people.

Anastasia Austin, a Philadelphia educator, wore a sweatshirt to the Harris event boasting of her affiliation with Zeta Phi Beta, one of the Divine Nine sororities to which Harris also belongs.

Austin and her husband took their 3-year-old daughter with them when they voted early in Delaware County.

"As an African American woman raising a daughter ... for my daughter to see somebody that looks like her in leadership, creating change," Austin said, "it brings me to tears."

Austin, like Harris, has Jamaican heritage and said she looks forward to leaders who embrace people from different backgrounds, not ostracize them.

SEE ALSO: Provisional Ballot Info and Where to Vote in Pa. for 2020 Presidential Election

Earlier in the day, Harris made an unscheduled stop at a Fresh Grocer in Philadelphia's Wynnfield Heights section where she talked to and greeted a few dozen people outside.

She then made a second unscheduled stop at Porky's Point in Hunting Park to pick up food for campaign volunteers.

The groundswell of early voting for the 2020 election is due in part to the youth vote.

Vice President Mike Pence has also been in Pennsylvania Monday for a Make America Great Again rally in Latrobe, Pennsylvania where he emphasized economic issues and warned people that the Biden-Harris ticket would be bad for fracking. He held another rally in Erie.

Joe Biden started the day in Cleveland, Ohio to encourage Ohioans to vote. By Monday afternoon, he was in Beaver County, Pennsylvania.

Speaking at a drive-in rally in Pittsburgh, Biden encouraged the audience to vote and said, "I have a feeling we're coming together for a big win tomorrow!" The crowd, about 250 cars gathered in the parking lot of Heinz Field, honked their horns and cheered as he spoke. Lady Gaga also participated in the Monday night rally.

President Donald Trump spent the final full campaign day sprinting through five rallies, from North Carolina to Pennsylvania to Wisconsin. Biden devoted most of his time to Pennsylvania, where a win would leave Trump with an exceedingly narrow path.

With an 'avalanche' of mail-in ballots exptected, Philadelphia's ballot count could take days to finalize.

Biden emphasized the pandemic. He declared that "the first step to beating the virus is beating Donald Trump," and he promised he would retain the nation's leading infectious disease expert, Dr. Anthony Fauci, whom the president has talked of firing.

Trump, meanwhile, made only passing mention of what his aides believe are his signature accomplishments - the nation's economic rebound, the recent installation of Supreme Court Justice Amy Coney Barrett - in favor of a torrent of grievance and combativeness. He angrily decried the media's coverage of the campaign while complaining that he also was being treated unfairly by, in no particular order, China, the Electoral College system and rock singer Jon Bon Jovi.

"I have been under siege illegally for three-and-a-half years. I wonder what it would be like if we didn't have all of this horrible stuff. We'd have a very, very calm situation," said Trump at an evening rally in Michigan. "People see that we fight and I'm fighting for you. I'm fighting to survive. You have to survive."

Later in Wisconsin, he stopped himself short in midsentence: "This isn't about -- yeah, it is about me, I guess when you think about it."

Trump also rallied in Scranton on Monday, underscoring the importance of the state's vote-rich northeast counties, and zeroed in on the state's process to count votes. He has used stark terms to threaten litigation to stop the tabulation of ballots arriving after Election Day - counting that is allowed with earlier postmarks in some states.

He has said that "we're going in with our lawyers" as soon as the polls close in Pennsylvania and on Monday spoke ominously about the Supreme Court decision to grant an extension to count the votes after Tuesday.

"They made a very dangerous situation, and I mean dangerous, physically dangerous, and they made it a very, very bad, they did a very bad thing for this state," Trump declared. He said of Pennsylvania's Democratic Gov. Tom Wolf, "Please don't cheat because we're all watching. We're all watching you, Governor."

There is already an appeal pending at the Supreme Court over the counting of absentee ballots in Pennsylvania that are received in the mail in the three days after the election.

The state's top court ordered the extension, and the Supreme Court refused to block it, though conservative justices expressed interest in taking up the propriety of the three added days after the election. Those ballots are being kept separate in case the litigation goes forward. The issue could assume enormous importance if the late-arriving ballots could tip the outcome.