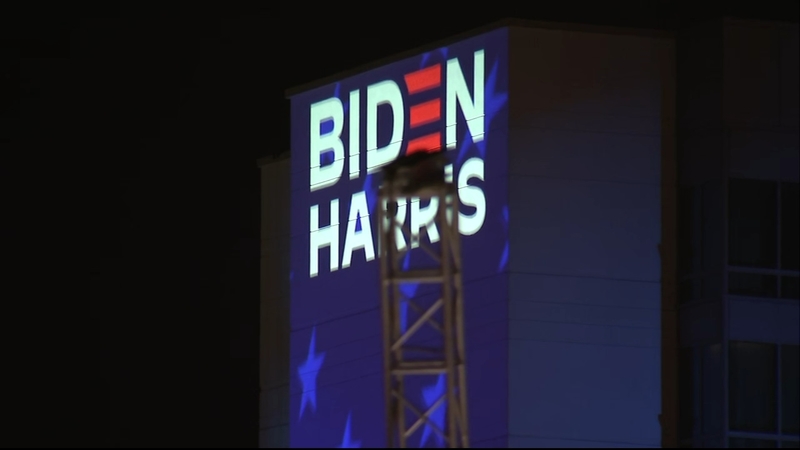 WILMINGTON, Delaware (WPVI) -- Voters turned out in force Tuesday in the key presidential battleground state of Pennsylvania as Donald Trump and Joe Biden headlined a statewide election in which millions of ballots have already been cast.

Polls opened on a day when Pennsylvania recorded its highest single-day total of new coronavirus infections. The pandemic formed an Election Day backdrop that also included a police shooting and civil unrest in Philadelphia and the potential for a drawn-out legal fight over late-arriving mail-in ballots.

Election officials cautioned the winner might not be known for days as counties begin tabulating more than 2.5 million votes cast ahead of time in the biggest test yet of the state's new mail-in voting law.

Democrats narrowly lost Pennsylvania in 2016 and with 20 electoral votes up for grabs, it could decide this election.

Democrats maintained their control of Delaware politics Tuesday, keeping hold of the state's congressional delegation, the governor's seat and all statewide offices.

Democratic Gov. John Carney defeated Republican challenger Julianne Murray. The race was seen partly as a referendum on Carney's handling of the coronavirus pandemic. His closures and restrictions on businesses led to thousands of Delawareans losing their jobs and filing unemployment claims in record-shattering numbers.

Murray, an attorney, sued Carney herself over a ban on short-term rentals he imposed early in the virus outbreak. The lawsuit remains pending in federal court. Carney has defended his actions and said he will continue to work to protect Delawareans from COVID-19. He also has pledged to address racial justice issues, strengthen public schools and improve Delaware's infrastructure.

Meanwhile, Democratic incumbent Chris Coons defeated Republican challenger Lauren Witzke to win reelection to the U.S. Senate. The win comes 10 years after Coons won a special election to fill the Senate seat once held by Biden. He was reelected to a full term in 2014 with almost 56% of the vote.

"I'm humbled and honored, and I am grateful, to have the chance to serve Delaware and to fight for Delaware in D.C., our nation's capital, again," Coons said. He said he has fought hard for all Delawareans over the past decade and intends to continue doing so.

"I'm going to keep working across the aisle," added Coons, who has shown a willingness to work in a bipartisan manner with Republicans on issues but almost always votes in step with fellow Democrats.

Earlier in the day, Biden made his final pitch to voters in Pennsylvania---stopping in Scranton- where he grew up- before heading to Philadelphia.

As we await 2020 election results for who will win the presidential race, Donald Trump and Joe Biden traded barbs and courted voters through the closing of polls on Election Day. 2

Incumbent Democrat Lisa Blunt Rochester won reelection to a third term as Delaware's lone delegate in the U.S. House of Representatives. Blunt Rochester defeated Republican challenger Lee Murphy to keep her seat. Blunt Rochester, a former state labor secretary, is the only woman and person of color to represent Delaware in Congress.

The last time Delaware voters sent a Republican to Washington was 2008.