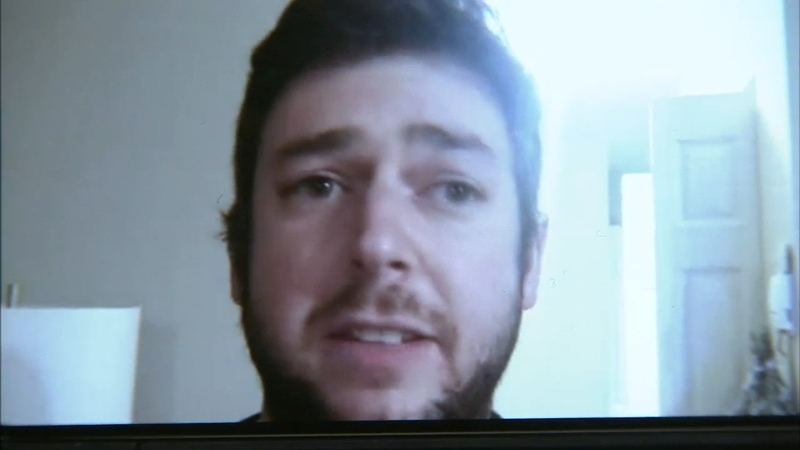 PHILADELPHIA (WPVI) -- A fan was ejected from a Philadelphia 76ers preseason game against the Chinese squad Guangzhou Loong Lions on Tuesday night after holding signs and shouting support for Hong Kong.

The incident came as the NBA finds itself connected to the ongoing protests in China.

Sam Wachs and his wife were holding signs in support of Hong Kong during the 76ers game at the Wells Fargo Center, but those signs were confiscated.

"There's no foul language, no politics.' I asked 'Why not?' They said, 'Don't give me a hard time,'" Wachs said in an interview with Action News.

Sixers fan ejected from preseason game vs. Guangzhou amid NBA-China controversy. Christie Ileto has more on Action News at 11 p.m. on October 8, 2019.

Wachs admitted he then stood up and started yelling "Free Hong Kong" before being escorted out.

On Wednesday, the 76ers issued a statement saying after "continued disruption," Wachs and his wife were removed from the game.

"The Wells Fargo Center's event staff is responsible for the security and comfort of all guests at arena events, including 76ers games. At last evening's game, following multiple complaints from guests and verbal confrontations with others in attendance, two individuals were warned by Wells Fargo Center staff about their continuing disruption of the fan experience. Ultimately, the decision was made by Wells Fargo Center personnel to remove the guests from the premises, which was accomplished without incident," the statement said.

There are 1.4 billion people in China, many of whom are NBA fans and generate millions in revenue for the league.

On Tuesday, NBA Commissioner Adam Silver said the league is not apologizing for Morey's since-deleted tweet showing support for anti-government protesters in Hong Kong, even after China's state broadcaster canceled plans to show a pair of preseason games in that country later this week.

Silver, speaking Tuesday at a news conference in Tokyo before a preseason game between the Rockets and NBA champion Toronto Raptors, went as far as to say that he and the league are "apologetic" that so many Chinese officials and fans were upset by Morey's tweet and comments that followed - but insisted that Morey has the right to freedom of expression.

"Daryl Morey, as general manager of the Houston Rockets, enjoys that right as one of our employees," Silver said. "What I also tried to suggest is that I understand there are consequences from his freedom of speech and we will have to live with those consequences."

Protesters arrested during demonstration in Hong Kong. Watch this CNN report from October 6, 2019.

"We're strongly dissatisfied and oppose Adam Silver's claim to support Morey's right to freedom of expression," CCTV said in a statement. "We believe that any remarks that challenge national sovereignty and social stability are not within the scope of freedom of speech."
The broadcaster is also reviewing all its cooperation and exchanges involving the NBA, said the statement posted to CCTV Sports' official social media account.

The NBA is not the first major corporation to deal with criticism from China over political differences. Mercedes-Benz, Delta Air Lines, hotel operator Marriott, fashion brand Zara and others also have found themselves in conflicts with China in recent years.

Silver is going to Shanghai on Wednesday and said he hopes to meet with officials and some of the league's business partners there in an effort to find some sort of common ground. He said he hopes Chinese officials and fans look at the totality of the impact of the three-decade-plus relationship between the league and their country, and urged them to see his response while acknowledging there are political differences between the countries.

"I'm sympathetic to our interests here and our partners that are upset," Silver said. "I don't think it's inconsistent on one hand to be sympathetic to them and at the same time stand by our principles."

Silver said the NBA did not expect CCTV to cancel plans to show the Lakers-Nets games. "But if those are the consequences of us adhering to our values, I still feel it's very, very important to adhere to those values," Silver said.

The rift between China and the NBA started late last week when Morey tweeted a now-deleted image that read: "Fight for Freedom. Stand with Hong Kong," in reference to months of pro-democracy demonstrations in the semiautonomous Chinese territory that has been mired in escalating violence between protesters and law enforcement.

Efforts were quickly made to defuse the impact; Rockets owner Tilman Fertitta said Morey does not speak for the Rockets, and Morey returned to Twitter on Monday in an effort to clarify his meaning. But damage was clearly done: At least one Chinese sporting goods company said it was no longer cooperating with the Rockets, NBA streaming partner Tencent - which has a $1.5 billion contract with the league over the next five seasons - said it would not show Rockets games and a sports news website in China said it was no longer covering the team.