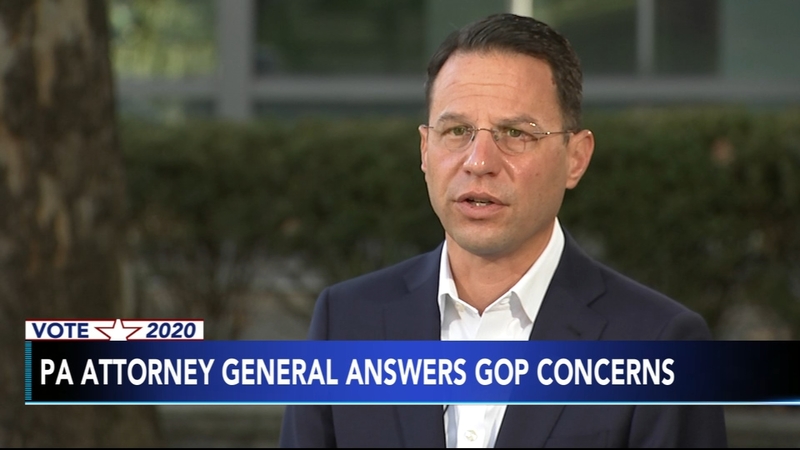 HARRISBURG, Pennsylvania (WPVI) -- Pennsylvania Attorney General Josh Shapiro has informed the Supreme Court that all counties in the commonwealth have been complying with Secretary of State Kathy Boockvar's guidance to segregate late-arriving mail-in ballots.

Pa. State Republicans asked the US Supreme Court for an emergency order to ensure that no late-arriving mail ballots are added to the state's election totals.

Rudy Giuliani, President Trump's personal lawyer, vowed to file a lawsuit Monday to challenge the conduct of elections officials in Pennsylvania - in statements made just moments after network analysis and projections showed Democrat Joe Biden had secured the electoral votes needed to win the White House.

In comments laced with vague and unfounded allegations of voter fraud in Pennsylvania, Giuliani, speaking in Philadelphia, alleged that the Trump campaign was deprived of the ability to watch the ballots being processed. And he said the campaign would make similar allegations in other states that could lead to a "massive nation-wide lawsuit."

"We were deprived of the right to inspect if a single one of those ballots is legitimate," Giuliani said, making an unverified claim that so far been unsupported by any evidence. "That is unheard of, it's illegal, it's unconstitutional, and we will be bringing an action challenging that."

The Trump campaign has now brought multiple similar charges into court since Election Day - in Michigan, Nevada and Pennsylvania -- and all but one of the cases has been rejected. In Pennsylvania, a state judge ordered election officials to allow observers to move closer to poll workers, but a federal judge refused to halt the count based on the claims.

In several of the cases, judges have used strikingly similar language to criticize Trump campaign attorneys for bringing the cases without sufficient evidence.

Shapiro released this full statement to the Supreme Court:

"At the time Secretary of the Commonwealth Kathy Boockvar filed her Response in Application to the Republican Party of Pennsylvania's Emergency Application for Injunction earlier yesterday, 63 of Pennsylvania's counties had affirmatively confirmed their understanding and intention to follow the Secretary's October 28, 2020 and November 1, 2020 guidance, as noted in the Response. Resp. at 1, 5. Since the filing, the Office of the Secretary of the Commonwealth has confirmed that the remaining four Pennsylvania counties have similarly confirmed their understanding and intention to follow that guidance. We would appreciate if you would circulate copies of this letter to the Justices of the Court. Thank you."

SEE ALSO: Will Trump concede? What's next for president after 2020 presidential election