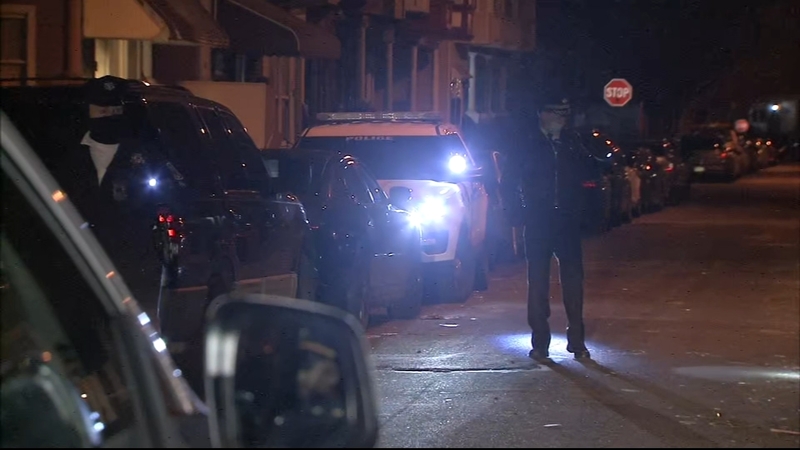 PHILADELPHIA (WPVI) -- A man is dead and another is recovering from being shot in the head in two separate incidents in West Philadelphia that occurred in the same area just hours apart.

Bullets shot through a car around 1:10 a.m. Tuesday on the 5100 block of Arch Street wounding a man sitting in the backseat.

Bullets shot through a car in West Philadelphia wounding a man sitting in the backseat.

Police said the 36-year-old victim managed to climb into the driver's seat. He was able to drive to flag down officers for help.

The victim was taken to the hospital in critical but stable condition. Police said he will survive.

Police then responded to another shooting just after 3:30 a.m. on the 100 block of Farson Street.

Arriving officers found a 25-year-old man lying unresponsive on the roadway near a small mountain bike.

Officer took the victim to Penn Presbyterian Medical Center where he was pronounced dead.

Philadelphia Police Inspector Scott Small said it appears based on ballistic evidence the shooter was standing very close to the victim when the shots were fired.

Small said the victim's girlfriend was with him at the time of the shooting. She was not injured. They both lived on the same block as the incident.

Small said family members and friends told police this may have been a domestic incident involving an ex-boyfriend.

"That's the preliminary information we are getting," Small said.

There were surveillance cameras in the area and police are hoping they recorded the suspect.

Small said, at this time, the shootings do not appear to be related, despite the proximity.

"At this time, we don't believe these two incidents, although they are only about two blocks away from each other and they happened a little over three hours timeframe from each - it's very close - however, at this time, we don't believe they are related," Small said. "We are going to look at the possibility that they are related, but for now, we're going to treat them as two separate, isolated incidents."
Report a correction or typo
Related topics:
philadelphiahomicide investigationhomicideshooting
Copyright © 2021 WPVI-TV. All Rights Reserved.
SHOOTING
Delaware shooting sends man to the hospital
Two teens injured in West Philadelphia shooting
Man killed outside of a Hunting Park 'speakeasy'
Police: Shooting leaves 1 man wounded at Concord Mall in Del.
TOP STORIES
Authorities swarm Laundrie family home in Gabby Petito case
Biden easing foreign travel restrictions, requiring vaccines
Suspect in fatal Pat's attack turns himself in, warrants issued for 2
Flood victim given days to move out of apartment with missing floor
Woman tells GMA she picked up Brian Laundrie as hitchhiker
Samuel Adams' new beer is so strong it's illegal in 15 states
Pfizer says COVID vaccine safe, effective for kids 5-11
Show More
3 men in police gear wanted in Philly home invasion
Teens, volunteers injured after bus crashes on way home from retreat
Emmys 2021: See the list of nominees, winners
100-year-old WWII hero shares his life lesson
Live! Casino and Hotel hosting job fair
More TOP STORIES News