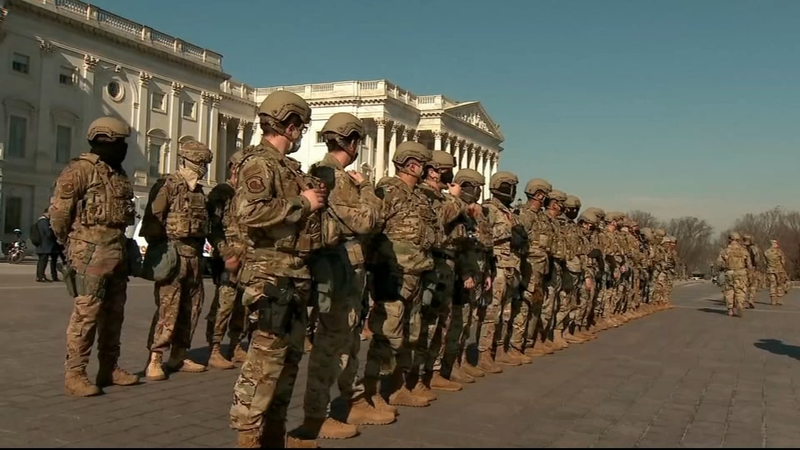 TRENTON, New Jersey (WPVI) -- The danger to the public and to law enforcement officers from explosive devices during protests planned in all 50 states between now and Inauguration Day "is substantial," the FBI warned in a new awareness bulletin obtained by ABC News.

The document is full of photos of devices used in the last eight months against civilian and law enforcement targets during public protests.

The FBI now wants to make first responders aware of what has been deployed in the past and what they might encounter during demonstrations by pro-Trump supporters following the siege at the U.S. Capitol last week.

'Kill him with his own gun': DC Metropolitan Police describe facing the mob at the Capitol
EMBED More News Videos

Three officers described their experience fighting a mob of President Donald Trump's supporters who'd invaded the Capitol in an insurrection unheard of in modern American history.

It includes this stark, if obvious, reminder: "The danger posed to law enforcement officers and the general public from all the tactics listed is substantial. If a suspicious item is reasonably believed to contain explosives, an IED, or other hazardous material, DO NOT touch, tamper with, or move the item. Only bomb disposal [personnel] should handle any suspected devices that are located."

Security is being ramped up across the country, and New Jersey in particular is asking for the public's help to report suspicious activity.

Earlier this week, the FBI offered chilling details from enforcement actions taken since the storming of the Capitol.

The updated bulletin mentioned an individual from Concord, North Carolina, who was observed loading ammunition boxes and preparing "gear" to take to Washington, DC, for an attack on the Capitol planned for Inauguration Day.

A new ABC News/Washington Post poll found that nine in 10 Americans oppose the Jan. 6 attack on the U.S. Capitol.

The FBI also received a report that an individual located in Manchester, Tennessee, who participated in the US Capitol riot intended to return to Washington, DC, on January 20 to disrupt and potentially commit acts of violence at the inauguration.

"The individual referenced turning phones to airplane mode and using ground travel to accomplish the disruption," the bulletin said.

The document said information was received regarding a video posted on an identified website encouraging people to kill senators and Congress members. The poster of the video was identified via social media exploitation.

The FBI said the video was threatening violence in Washington, D.C. on Inauguration Day and advised people to bring guns.

The bulletin repeated the earlier warning that there are "armed protests planned at all 50 state capitals from 16 January through at least 20 January."

President Donald Trump released a video statement Wednesday night and called for an end to further violence. While he did not mention being impeached or take responsibility for last week's attack, he did condemn the violence.

While every state is preparing, as a practical matter, the FBI and Homeland Security are most concerned about the potential for violence in Minnesota, Michigan, Wisconsin, and Pennsylvania, where election controversies became overheated and there's a considerable presence of supporters of armed militia movements, according to law enforcement sources.

Additionally, the FBI, DHS and National Counterterrorism issued a joint intelligence bulletin painting a horrifying picture of the dangerous situation the country faces in the wake of last week's siege.

The riots in D.C. were both the result of the current dangerous environment, analysts report, but the siege is also serving to fuel the growing danger because violent extremists are viewing the events of January 6 as a "success." The document also points out the danger posed by conspiracy theories and QAnon, and how extremist groups are now working together.