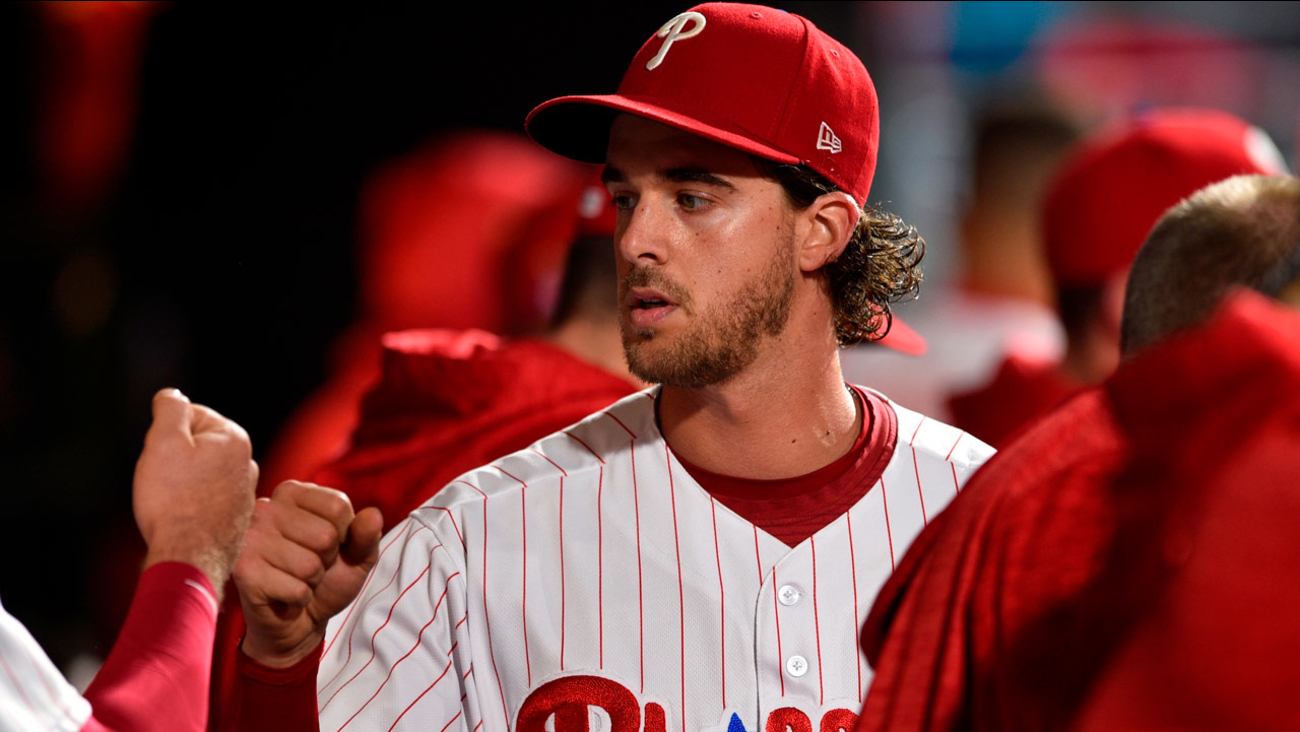 The Philadelphia Phillies have only one All-Star - pitcher Aaron Nola.

Congratulations on what is sure to be your first of many @AllStarGame selections, @AaronNola027! #GeauxPhils pic.twitter.com/1Hzw140cDY

The right-hander was selected to his first All-Star Game on Sunday. He enters Monday's start fifth in the NL in ERA (2.41) and sixth in strikeouts (116).

Nola will try to become the National League's first 12-game winner - and match his career high for victories - when he starts Game 2 of a doubleheader against the New York Mets.

Mike Trout, Aaron Judge and Mookie Betts form a dream outfield for the American League. Bryce Harper and Max Scherzer make up a not-so-gracious welcome committee for the NL.

Power in the center of power. A capital-sized All-Star Game.

Baseball unveiled the rosters for its midsummer showcase Sunday night, featuring an imposing AL lineup and Harper starting at his home ballpark in Washington.

Reigning AL MVP Jose Altuve was one of five All-Stars from the World Series champion Houston Astros, matching the Boston Red Sox and Cleveland Indians for most in the majors. The New York Yankees and Atlanta Braves each had four, including rookie Gleyber Torres from the Bronx Bombers and fellow second baseman Ozzie Albies from the surprising Braves.

"It's fun. You're playing but you're looking around because you're playing with all those big boys out there," said Altuve, who made the AL team for the sixth time.

Torres is on the disabled list with a hip injury and unlikely to participate. While he and Albies are just 21 years old, the list of 25 first-time All-Stars also includes thirty-something surprises like Boston first baseman Mitch Moreland, Texas Rangers slugger Shin-Soo Choo and Atlanta outfielder Nick Markakis.

"It's something that I didn't know it would ever be quite possible," Moreland said. "I'm definitely excited about the opportunity and appreciative of having that opportunity."

Trout is working on perhaps the best season of his stellar career with the Los Angeles Angels. Judge has 25 homers and 58 RBIs for the Yankees, and Betts is batting .342 with 22 homers for the major league-leading Red Sox.

But that's just the beginning for the AL, which has won five All-Star Games in a row and 17 of the last 21.

Altuve led the fan balloting with 4.8 million votes. Baltimore Orioles shortstop Manny Machado will make the short trip down to D.C. for the July 17 game with speculation increasing about his future ahead of the trade deadline.

"The best part is being with all the guys. You're on the biggest stage with the best," said Trout, who was selected for the seventh straight year - tying Boston ace Chris Sale for the longest active streak.

Harper was voted a starter for the fourth consecutive year. The slugger, who is eligible for free agency after this season, is batting just .218 for disappointing Washington but has 21 homers and 50 RBIs.

He was joined by ace right-hander Max Scherzer and reliever Sean Doolittle from the Nationals. Scherzer, a three-time Cy Young Award winner, could get the start in his home ballpark.

"That'd be an unbelievable experience," he said in an interview on ESPN.

"Very excited to represent the Nationals in D.C.," Harper said. "Looking forward to this week to hopefully get one of our other teammates in there as well."

"It's something I've watched for a long time. To be a part of it would be pretty cool," Benintendi said.

Markakis and Matt Kemp will join Harper in the NL outfield. Kemp's return to the Los Angeles Dodgers has been a smashing success. Markakis has been a key performer for the Braves and made an All-Star team for the first time in his 13 major league seasons.

"It is kind of emotional. I know my kids and my family are going to be ecstatic," he said. "Whether it came in my first year or this late in my career, it is going to be an exciting time."

"My first reaction was like, 'I have no words to say,'" Contreras said, "but I started crying when I went down to the cage because I hoped for it and I've been working hard every single game that I've played and played it like it was my last one."

As usual, there were some notable snubs - with several changes surely coming due to injuries and withdrawals.

Tampa Bay left-hander Blake Snell, who is 12-4 with an AL-best 2.09 ERA, was the most incomprehensible omission. Houston right-hander Charlie Morton and Oakland Athletics infielder Jed Lowrie were also left out despite worthy credentials.

"Having to have every team represented I think presents a bit of a problem for Major League Baseball," Astros ace Justin Verlander said. "I think it's not necessarily always the guys that are having the best years. I think especially in the game today where you have some teams that are tanking, I think it makes it kind of difficult.

"It happens every year but it seems like this year is even a little bit more difficult than in years past. Some guys get snubbed."