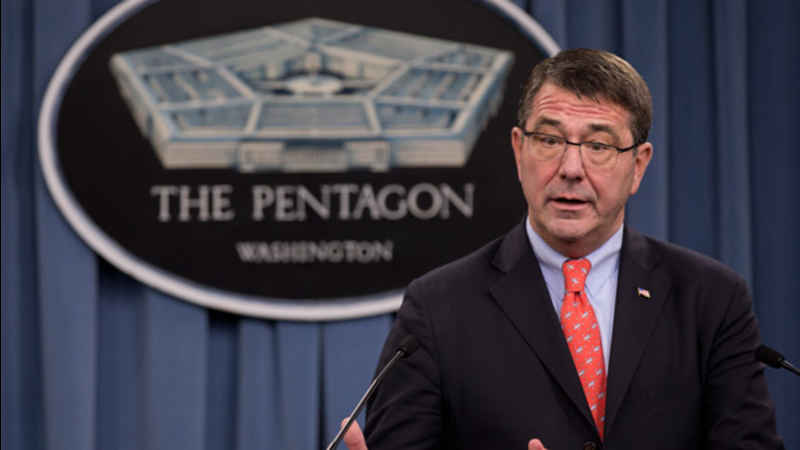 Obama announced Carter's nomination during a ceremony at the White House. A Pentagon veteran who is seen as a centrist, Carter is expected to be easily confirmed by the Senate, putting him at the helm of a department moving back into military conflict in the Middle East even as it grapples with budget cuts.

In discussing the Pentagon post with Carter, Obama said he emphasized the need "to make smart choices, precisely because there are so many challenges out there."

Carter, a widely respected physicist and academic, has won praise from some Republicans, suggesting he'll face a smooth Senate confirmation. Carter would replace Chuck Hagel, who resigned under pressure last week after a bumpy tenure.

Hagel did not attend Friday's event. A defense official said the outgoing secretary did not want to distract from Carter's nomination, though the two men did speak by phone Friday morning.

The leadership shakeup at the Pentagon marks the only major change Obama has made to his national security team during his second term.

The level of control the White House has exerted over the Pentagon in particular has rankled those who have held the agency's top job before Carter. Former Defense Secretaries Robert Gates and Leon Panetta have both spoken extensively about what they saw as White House micromanagement and meddling in Pentagon affairs.

In brief remarks Friday, Carter signaled that he would not shy from expressing his opinion in his new role.

"If confirmed in this job, I pledge to you my most candid strategic advice," he said to Obama.

While the White House has denied that it has negatively interfered with the Pentagon, officials made clear this week that Obama had no plans to loosen his reins on the Defense Department.

"The president of the United States is the commander in chief and sits at the top of the chain of command," Obama spokesman Josh Earnest said. "That means the president bears significant responsibility for what happens at the Pentagon and the Department of Defense."

Nebraska Sen. Deb Fischer, a member of the Senate Armed Services Committee, was among the Republicans who praised Carter's nomination, while also taking issue with Obama's national security strategy and decision-making.

Fischer said that while Carter "brings to the position impressive experience," she remains concerned that "the administration continues to lack a coherent strategy to counter an array of global crises."

Sen. John McCain, R-Ariz., a fierce critic of Obama's foreign policy, also praised Carter, but said he hoped the new nominee "fully understands that, as previous secretaries of defense have strongly attested, he will likely have limited influence over the tight circle around the president, which apparently controls the entire strategic decision-making process."

Carter has extensive experience in the national security arena. He held the No. 2 job at the Pentagon from October 2011 to December 2013 and also served as the Defense Department's technology and weapons-buying chief during the opening years of Obama's presidency.

During the administration of President Bill Clinton, Carter was assistant secretary of defense for international security policy.

Beyond his Pentagon experience, Carter is known for his stellar academic credentials. He has bachelor's degrees in physics and medieval history from Yale University and received his doctorate in theoretical physics from Oxford University, where he was a Rhodes Scholar. He has served on the advisory boards of MIT's Lincoln Laboratories and the Draper Laboratory. He has extensive knowledge of the inner workings of the U.S. nuclear arsenal.

"I like dusty archives, learning to decipher manuscripts in medieval script, and learning all the languages necessary to read the primary and secondary historical literature, especially Latin," he wrote a 2007 autobiographical sketch published by Harvard University when he was on the faculty of the Kennedy School of Government.