False claims about abortion have been circulated online and on social media.
ABCNews
By Mary Kekatos Since Roe v. Wade legalized abortion nationwide, advocates and opponents of abortion rights have argued over how safe abortion is, how it's performed and even where the public stands on whether it should be legal.

Now, the Supreme Court may be set to overturn the landmark 1973 decision, according to a leaked draft opinion initially reported by Politico last week.

Ahead of the final decision, which is expected in either June or July, ABC News spoke to public health experts about five common myths surrounding abortion and what the statistics actually show.

Data from the Guttmacher Institute, a research group focusing on sexual and reproductive health, showed at-home medication abortions, not in-office procedures, make up most abortions in the U.S.

Drugs for medication abortions were first developed in the late 1970s as an alternative, non-surgical, form of abortion in which someone takes two pills to end a pregnancy.

Women are sharing their abortion stories after a leaked Supreme Court draft opinion shows a majority of justices appear to have voted to effectively overturn Roe v. Wade.

The first pill is mifepristone, which was authorized by the U.S. Food and Drug Administration in 2000. It works by blocking the hormone progesterone, which the body needs to continue a pregnancy.

This causes the uterine lining to stop thickening and to break down, detaching the embryo. The second drug, misoprostol, taken 24 to 48 hours later, causes the uterus to contract and dilates the cervix, which will expel the embryo.

In the U.S., the drugs are approved up to 10 weeks' gestation, although the World Health Organization says they can be taken up until the 12-week mark.

As of 2020, medical abortions account for 54% of abortions performed in the U.S., up from 24% a decade ago, according to the Guttmacher Institute.

Otherwise, patients can get an in-office procedure, including, in earlier pregnancy, one in which suction is used to empty the uterus. Contrary to beliefs that abortion is a prolonged procedure, most take less than 10 minutes, according to Planned Parenthood.

Patients may choose to have an in-office procedure rather than a medication abortion for many reasons, including the availability of abortion appointments, Dr. Evelyn Nicole Mitchell, an obstetrician and gynecologist with Keck Medicine of the University of Southern California, told ABC News.

"By the time [some women] see a provider, it's past the nine- or 10-week mark, and the only option at that point is surgical abortion," she said.

Myth: Many abortions happen in the second and third trimester

According to a Centers for Disease Control and Prevention report published in November 2021, 629,898 abortions occurred in the U.S. in 2019, the latest year for which data is available.

Of those abortions, the overwhelming majority occurred before 13 weeks' gestation, which is the beginning of the second trimester.

The report also showed from 2010 to 2019, abortions performed later than 13 weeks' gestation was either at 9% or lower. Just 1% of abortions were performed after 20 weeks.

Public health experts told ABC News the majority of women who have abortions in the second trimester largely fall into one of two groups.

One group is made up of pregnant people who come from backgrounds with traditionally less access to health care, such as living in rural areas or being of lower socioeconomic status, according to Mitchell.

The other group is made up of those who choose to have an abortion because of diagnoses the fetus will be born with severe disabilities, or because their own health is in jeopardy.

"By the 15th week or so, many women are fully committed often to having that pregnancy," said Dr. Paula Tavrow, a professor of community health sciences at the University of California, Los Angeles Fielding School of Public Health "And then they may get dire news such as there are fetal abnormalities, or it might impair their health or well-being in some way to continue with the pregnancy."

Two women died following complications from legal-induced abortions in the U.S. in 2018, the latest year for which data is available, according to the CDC's Pregnancy Mortality Surveillance System.

This represents a nearly 8-fold decrease from the case-fatality rate of 3.2 deaths per 100,000 legally induced abortions in 1972, the year before abortion was legalized nationwide, according to a CDC report at the time.

"So long as abortions are performed in a clean environment with properly trained people, they're extremely safe," said Tavrow. 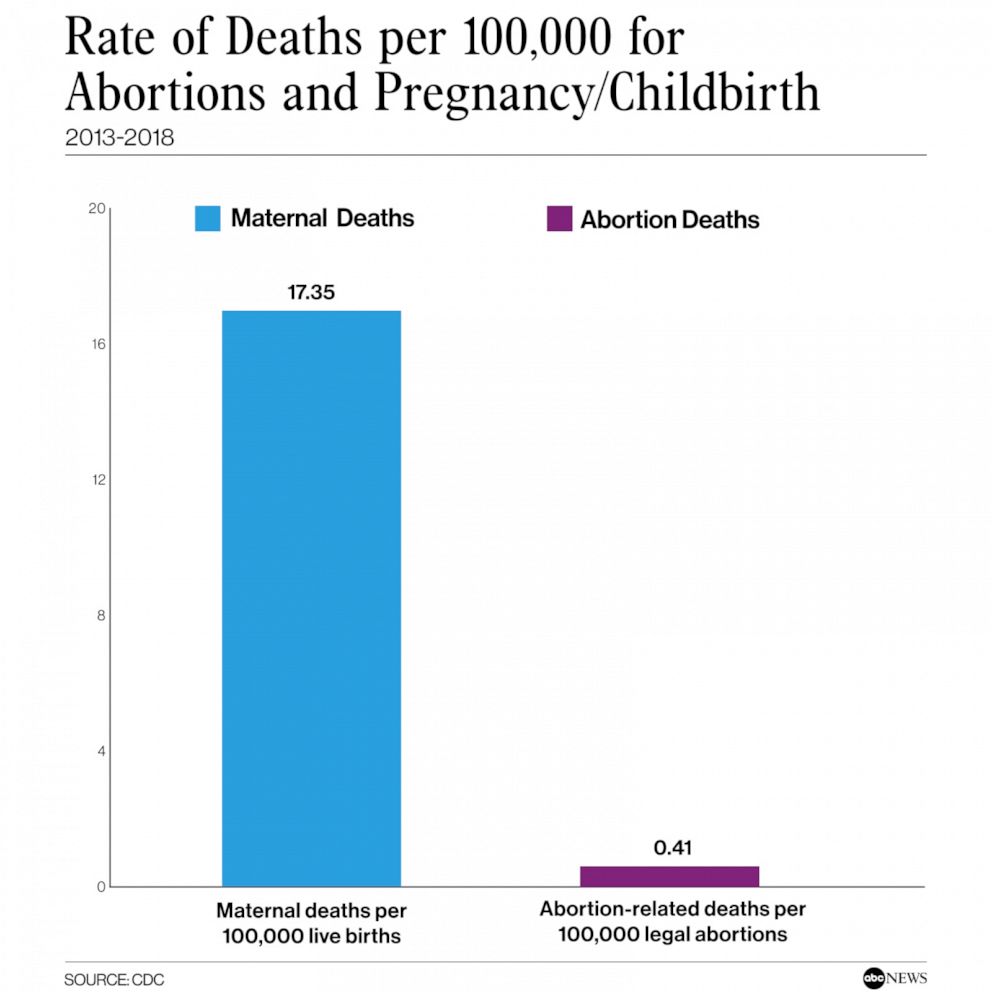 By comparison, an analysis showed pregnancy and childbirth are far more dangerous in the U.S.

Over the same period, the mortality rate was 17.35 pregnancy-related deaths among mothers per 100,000 live births. Causes of death included cardiovascular conditions, sepsis, hemorrhaging and embolism.

"By the nature of getting pregnant, someone automatically puts themselves into a higher risk category," said Dr. Deborah Bartz, an obstetrician-gynecologist at Brigham & Women's Hospital in Boston. "It is absolutely false to claim it is equally safe or even more risky to have an abortion" than to continue with a pregnancy.

Experts said the risk with abortions occurs when they are performed unsafely, with the World Health Organization stating unsafe abortions are a "leading cause" of maternal deaths worldwide.

Myth: Abortions have only risen since Roe v. Wade was decided

Following the decision of Roe v. Wade, legal abortions in the U.S. did increase from a rate of 16.3 per 1,000 women, reaching its peak in the early 1980s before falling.

"Abortion temporality spiked because it was now safe, but the rate of abortion has really decreased," said Tavrow. 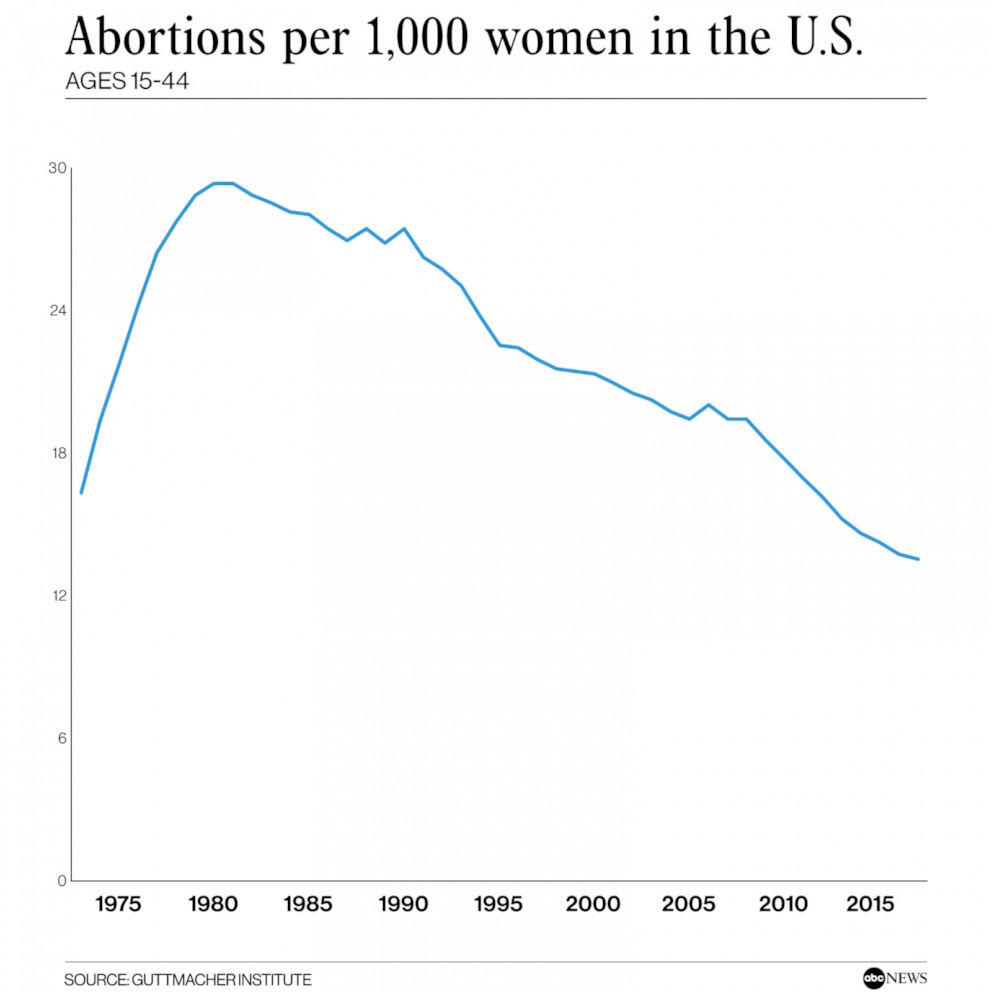 As of 2017, the rate of legal abortions sits at 13.5 per 1,000 women, the lowest rate ever recorded, according to the Guttmacher Institute.

The experts said the rate has decreased due to several reasons, including greater access to contraceptives as well as more birth control methods with higher efficacy rates.

Additionally, the Guttmacher Institute noted, abortion rates have declined as births and pregnancies have fallen overall in the U.S.

Despite the Supreme Court being poised to overturn or severely gut Roe v. Wade, most Americans believe just the opposite should happen.

An ABC News/Washington Post poll conducted in advance of the leaked draft opinion found 58% of U.S. adults said abortion should be legal in either all or most cases.

By comparison, just 37% of adults said they believed abortion should be illegal in all or most cases.

What's more, 70% of those polled said the decision on whether a woman can have an abortion should be left to the woman and her doctor while 24% said it should be regulated by law.