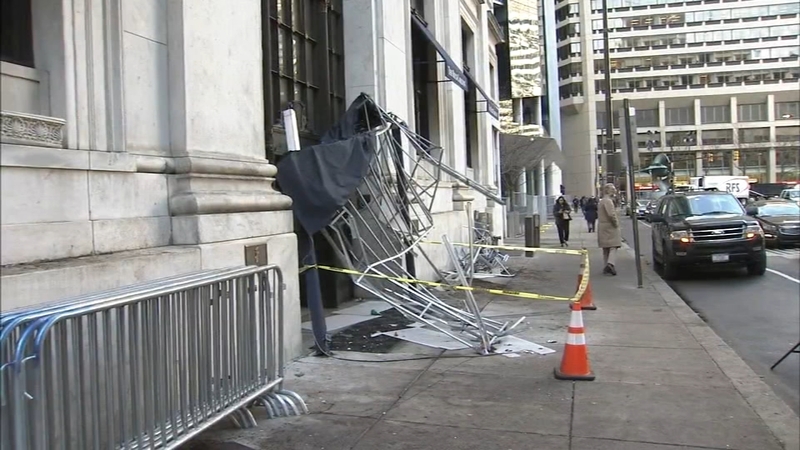 PHILADELPHIA (WPVI) -- It was a celebration like none other in Center City and throughout Philadelphia after the Eagles won their first Super Bowl Championship. But there were fans who took the celebration too far Sunday night, causing damage in parts of the city.

The mayor's office said earlier Monday that three arrests were made, though Philadelphia police have declined to release an official number so far.

The windows at Macy's on Market Street were smashed, with glass and debris littering the sidewalk. By Monday morning, the store window had been boarded up and the glass had been cleared.

"The lion's share of people celebrate peacefully, but you're going to get some idiots out there that feel like, for whatever reason, they have to destroy property," said Commissioner Richard Ross.

Ross said the sheer volume of people made it difficult for officers to respond to specific areas on Sunday night.

Fans could be seen climbing poles and the gates in front of City Hall, while traffic lights were brought to the ground in several places.

A video shows a car flipped onto its driver's side at Broad and Walnut.

Meanwhile, outside the Ritz-Carlton, the entrance awning collapsed under the weight of a group of people who climbed on top of it.

Video captured the moment a Philadelphia Eagles fan did a trust fall off the awning outside the Ritz Carlton in Center City Philadelphia.

Ross said some revelers and officers suffered minor injuries, including himself.

"They were working under some very difficult circumstances, bottles being thrown at them. Yours truly had one hit him in the head," said Ross. "I don't get what people do and why they do it."

Fans we talked to didn't understand it either.

"We won! There's no reason to tear up! Be happy we won and keep moving," said Dee Moses.

Police worked to manage the crowds on foot, bikes, and horses.