Some fans are getting permanent tattoos of Super Bowl LII 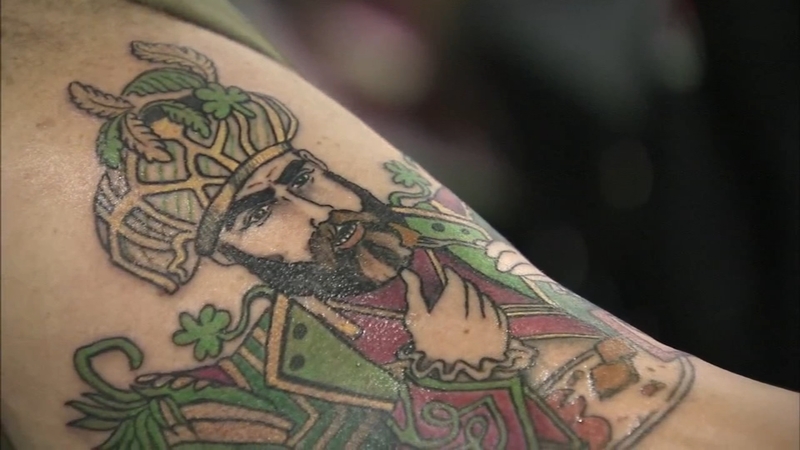 Some fans are getting permanent tattoos of Super Bowl LII

PHILADELPHIA (WPVI) -- At the Philadelphia Tattoo Arts Convention, there have been requests for Eagles' tattoos.

It may seem extreme to some, but the inked fans we spoke to say this unforgettable season deserves an everlasting tribute.

If you had to come up with an image that is undeniably Philly, it might look like Jason Kelce in a mummers costume eating a Scrapple and Taylor pork roll.

And now that very image is tattooed on Bill Miller's arm.

"I had an idea. The breakfast came into play in Kelce's speech. Long story short, he said I'll give you a killer deal if you can get to the convention and you let me tattoo Kelce on you," said Bill Miller of Fox Chase.

Adam Elliot from Passion and Pride Tattoo says the Philadelphia Tattoo Arts Convention could not have come at a better time. He's booked solid, mostly with clients looking for Eagles ink.

"Tons of requests. My phone's like literally smoking on fire with texts and messages for requests for Eagles' tattoos," Elliot said.

For Colin Roualet this was a big step. We spoke to him midway through an Eagles logo tattoo on his thigh.

"This is my first tattoo, representing with the Birds," he said.

From number nine for Nick Foles to a sketch of the Philly Special, these Eagles' fans say it's a permanent way to celebrate this victory.

Christian Duffield of Fox Chase said, "That tattoo's on my body forever. It don't matter how old I get. I'll know Super Bowl 52, Nick Foles led us to the promise land, and we got that W."

If you're looking for any ideas, the Tattoo Convention continues through Sunday.