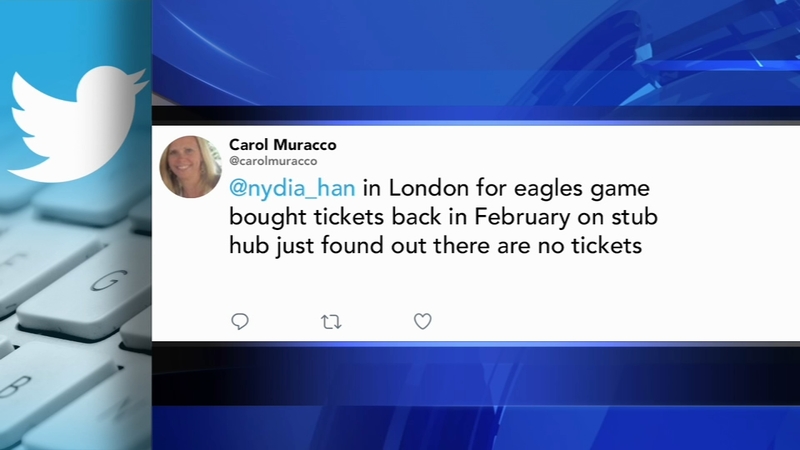 LONDON (WPVI) -- The Action News Troubleshooters are at it again, getting big results for Eagles fans.

These consumers are desperate to attend the London game after their ticket reseller failed to produce their tickets.

On Monday - the Troubleshooters came to the rescue of one couple, getting them two tickets to the London game after online reseller Viagogo failed to deliver the tickets they bought in the spring.

And now, we have great news for a South Jersey family who had the same problem but with StubHub.

Charlie Muracco and 7 members of his family planned their London adventure to see the Birds in England back in February, buying tickets to the big game at Wembley Stadium on StubHub.

But Charlie says along the way, they got worried when the tickets never showed in their account.

"We continued to ask about the tickets, but they said don't worry the buyer has them, if you don't ever get them we can give you them at the tent at the game," he said.

They arrived in London on Wednesday and that afternoon, received terrible news.

"StubHub basically said we're sorry but we can't get you tickets we are going to refund your money. It really is devastating, we really would love to - we want to go to the game," said Charlie.

Action News Producer Heather Grubola was the one who was actually talking to StubHub, helping get results for the Muracco family.

"Thank you so much Heather! It's awesome, we've been watching Action News our entire life. We see you doing the Troubleshooting all the time, but we never thought we'd be a part of it but we really thank you. It's absolutely awesome. Thank you so much," said Chris.

In the meantime, StubHub sent Action News a statement, which reads:

"StubHub has our customers' backs, and in the rare instances where something goes wrong, every ticket is 100% guaranteed by our FanProtect Guarantee. Our mission is to get fans in their seats when it matters, and that's exactly where Mr. O'Donnell will be this Sunday at Wembley Stadium. In this case, we were able to provide him with replacement tickets for his original order for the Philadelphia Eagles vs. Jacksonville Jaguars match-up, and wish him a memorable game day experience in London."

** Note: The Muracco family's tickets were purchased under the name O'Donnell. He is a member of their group.