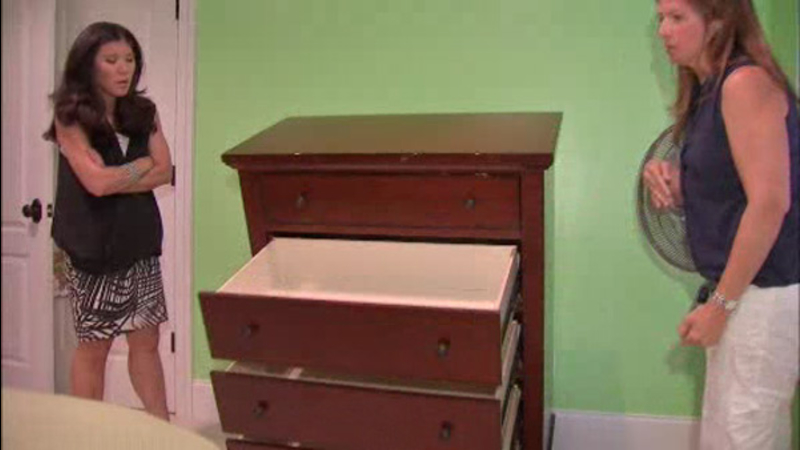 PHILADELPHIA (WPVI) -- A family from Penn Valley says their 4-year-old son could have been killed by a potentially dangerous piece of furniture. Steve and Kim Lichtenstein contacted Action News Troubleshooters for help warning others about this issue so no one gets hurt.

Let me set the scene for you: A 4-year-old boy gets sent up to his room for being naughty and, within seconds, his parents hear something they will never forget.

"We just heard a loud crash and heard him scream right away," Kim Lichtenstein said.

Those screams were coming from their son Hudson. It was his dresser that came crashing down.

"Hudson was pinned...with the drawers on top of him. It was terrible, the worst thing imaginable," Kim said.

The Lichtensteins rushed their son to the hospital to make sure he hadn't suffered any internal injuries. Fortunately, he was okay.

So what causes the dresser to tip over? Simply opening more than one drawer at a time.

The dresser does come with a warning label on the back, but Kim doesn't feel that was sufficient.

The Lichtensteins bought the dresser from Costco.

They say they never saw the warning label on the back because when the chest was delivered, it was placed against the wall for them and they were given no instructions or hardware to secure it to the wall.

The Lichtensteins say they alerted a Costco representative about the incident that same day.

"She didn't seem to think there was a problem and I didn't hear back from anyone since then. I think if they're alerted to a potential life-threatening problem, they should heed that warning until it's investigated and I don't feel that they've done that," Steve said.

"I would like to see just more consumer education out there about this," Kim said.

Costco tells us a wall anchoring system should have been left inside the dresser.

And after we got involved, Springhill Designs, the furniture company that sold the dressers to Costco, had this to say:

"The bedroom chest now provides multiple warning labels regarding tipping on the front, on the back, and in the assembly instructions. Springhill Designs is contacting the delivery agent to leave the labels on the furniture and to ensure that the tipping restraint hardware pack is left with the furniture upon delivery."

The Consumer Product Safety Commission is unable to speak directly about the Springhill Design product but had this to say in general:

Too many instances before have ended in tragedy when the child was crushed or trapped under the weight of the product that toppled over.

The current standard, ASTM F2057 requires chest-type furniture taller than 30 inches to not tip over during stability testing. The test which is essentially an open drawer or door with a 50lb weight attached. The weight is intended to simulate the weight of a 95th percentile 5 year old child. The standard also recommends wall/floor mounting hardware with instructions. The restraints should also withstand a pull force of 50 pounds.

CPSC's message to parents: anchor it and protect a child. Tragic tip-over incidents can be prevented with these three steps:

1. Use anti-tip devices to anchor furniture, televisions and appliances
2. Use the appropriate base for the size and weight of the television
3. Never leave toys, remote controls, or other items that may be tempting to young children on top of the TV or furniture item

Awareness followed by action is key.

The CPSC also strongly encourages consumers to file reports of dangerous products with the CPSC. Here is the link to the online form.