All-clear given after suspicious device reported in Lindenwold, N.J. 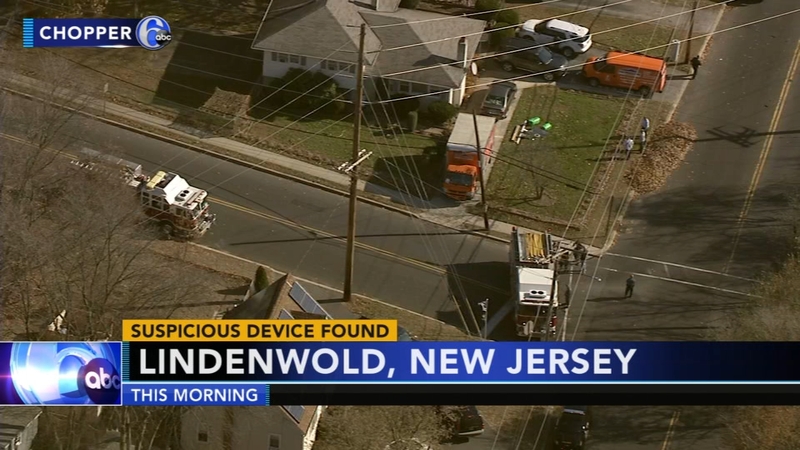 LINDENWOLD, N.J. (WPVI) -- Authorities have sounded the all-clear after investigating reports of a suspicious device in Lindenwold, Camden County.

Officials tell Action News no explosives have been found in the 1100 block of West Park Avenue.

The report came in at 11 a.m. Monday from an apartment located on the block.

Watch video from Chopper 6 over the 1100 block of West Park Avenue in Lindenwold, NJ where a suspicious device was reported.

Police arrived. An explosives team was called in a short time later and determined whatever was found was inert and posed no threat.

County officials said it also became clear there was no reason to believe there might be other similar devices in the area.

This was found in an apartment and it was inert, no other devices were found and no reason to believe that others would be out there according to county officials. (source Dan Keashan)
Related topics:
lindenwoldnew jersey news
Copyright © 2021 WPVI-TV. All Rights Reserved.
TOP STORIES
Search for Brian Laundrie in nature reserve called off for night
One dead, two injured in Southwest Philadelphia fire
AccuWeather: Pleasant Sunday, Turning Less Humid
Two teens injured in West Philadelphia shooting
Heavy police presence as protesters trickle in for DC rally
SpaceX crew successfully splashes down off Florida coast
Man killed outside of a Hunting Park 'speakeasy'
Show More
US ramps up plan to expel Haitian migrants gathered in Texas
Video shows 4 suspects sought in fatal beating at Pat's Steaks
Police: Shooting leaves 1 man wounded at Concord Mall in Del.
Grocery stores among industries seeing supply chain issues
FDA panel backs COVID-19 boosters only for elderly, high-risk
More TOP STORIES News