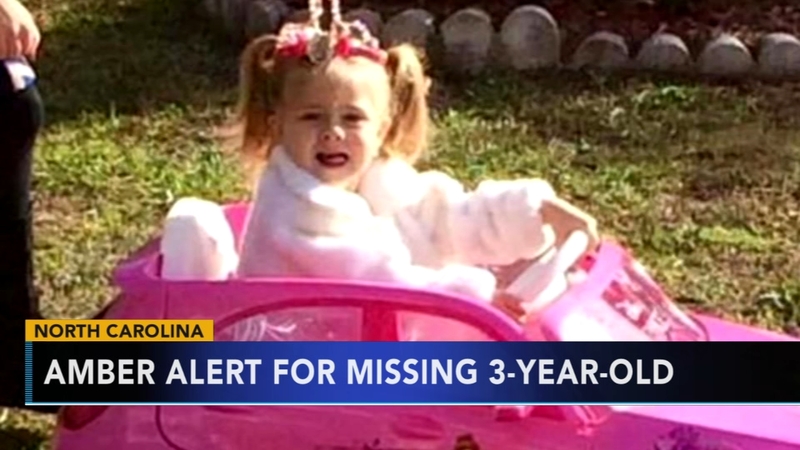 A North Carolina mom reached out to the public in an emotion-filled plea after her 3-year-old daughter disappeared on Sunday night.

"Please, bring her back ... She's my baby, she's my everything," said the child's mother, Kristy Woods. "Just to be able to touch her and hold her and not let her go again. I'd give anything."

The girl was last seen on Sunday night when Mariah's mother says her boyfriend last saw the toddler around midnight, and he told her to go back to bed.

When her grandmother went to wake her up the next morning, she was missing.

An amber alert has been issued for Mariah Woods from Jacksonville, North Carolina, soon after she was reported missing at approximately 6 a.m., according to Jacksonville Sheriff Hans Miller.

Woods is described as a white female with brown hair and blue eyes, about 2 feet 9 inches tall and weighing 30 pounds.

"[Officials are] working everything that can be worked to find this little girl," said Sheriff Miller.

Four volunteer fire departments, the Onslow County Sherriff's Department and K9 unites conducted a search in the wooded area behind the girl's home as well as surrounding wooded areas, WCTI reported. They also used a helicopter and drones to aide in the search.

"We don't know what happened. It's entirely premature to try to determine what happened," said Sheriff Miller.

Officials have interviewed both Woods' mother and her live-in boyfriend and conducted a search of their home and vehicle, WCTI reported. The Onslow County Sheriff's Department is also asking neighbors in the area to check their yards, sheds and other areas for any evidence of a little girl.