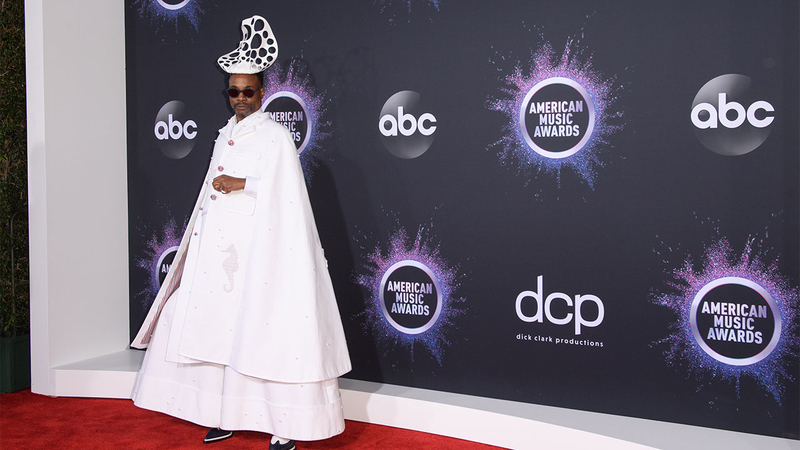 LOS ANGELES -- You can always count on Billy Porter to make an entrance.

At the American Music Awards on Sunday evening, the actor walked the red carpet in a nearly all-white Thom Browne ensemble that included a white shirt and tie, knee-length coat and wide-legged pants. The outfit included "hints of red, white and blue because I'm an American," Porter later tweeted.

Tonight’s @amas lewk. I’m wearing hints of red, white and blue because I’m an American. And this is what we look like. #AmericanMusicAwards  #AMA’s

He also sported a hat designed by Stephen Jones and an Oscar Heyman & Brothers ring.

Porte later said of his look during the award show while introducing Camila Cabello: "Understated. Low-key. Restrained. That is not how I approach the roles I play or the red carpet. Look at me, I'm an entire mood!"

Sunday night's outfit was the latest in a string of attention-grabbing red carpet looks for the "Pose" star, who made headlines at the Oscars in a custom velvet tuxedo gown designed by Christian Siriano.

At the Oscars, Billy Porter stood tall and proud in a bombshell velvet tuxedo gown created by Christian Siriano.

Porter was later decked out as an Egyptian-inspired sun god in gold wings and a chain headpiece at the Met Gala, and he donned a glittering suit and a towering asymmetrical hat at the Emmys in September.

Billy Porter said his gala moment was inspired by back-in-the-day Diana Ross, Elizabeth Taylor and "everything else."