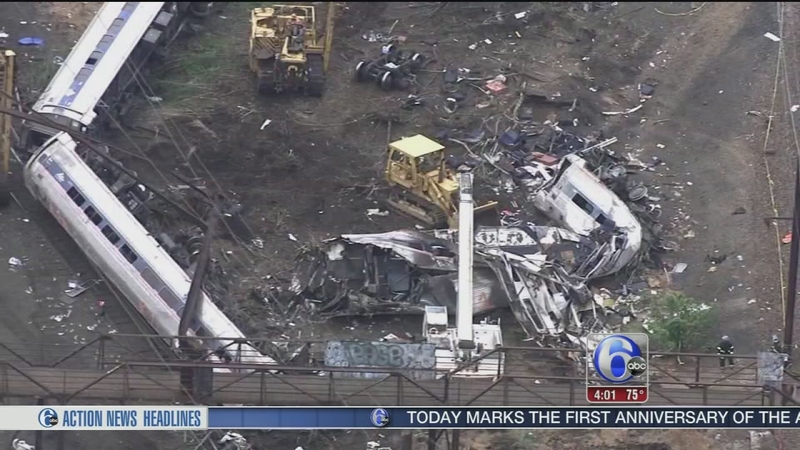 VIDEO: Amtrak crash 1 year later: Probable cause to be revealed

PHILADELPHIA (WPVI) -- Federal investigators will meet next week to detail the probable cause of last year's fatal Amtrak train derailment in Philadelphia.

The National Transportation Safety Board's meeting Tuesday in Washington will be held just over a year after the crash that killed eight people and injured more than 200 others.

The New York-bound Northeast Regional train entered a sharp curve at 106 mph, more than twice the speed limit, on the night of May 12, 2015, and tumbled off the tracks.

According to a previously released transcript of his interview with federal accident investigators, engineer Brandon Bostian said the last thing he remembers is pushing the throttle forward to pick up speed and then braking when he felt the train going too fast into a sharp curve.

When he realized the train was about to derail, Bostian said he was holding tightly to the controls and thinking, "Well, this is it, I'm going over."

The train's data recorder shows that at about 55 seconds - a mile and a half - before the Frankford Junction curve, one of the sharpest in Amtrak's Northeast Corridor, Bostian applied full throttle and held it there for about 30 seconds. The train reached a speed of about 95 mph.

He then slightly lowered the throttle for 2 seconds before returning to full throttle and holding it there for another 20 seconds. Three seconds before the train derailed, at a speed of 106 mph, Bostian applied the emergency brake.

Video from Chopper 6 shows the aftermath of the crash of Amtrak 188.

That reduced the speed to 102 mph, but by then it was too late. Four of the train's seven cars and its locomotive derailed in a tangled heap.

Bostian provided his cellphone to investigators, who say there's no indication he was using it while operating the train.

Other avenues of investigation have also turned up dry holes, according to previous statements by investigators. The data recorder shows the train's top-of-the-line new Siemens engine was functioning normally. No anomalies were found in the tracks or signal boxes. There was no vehicle or object on the tracks. Toxicology tests of Bostian found no drugs or alcohol.

The Philadelphia District Attorney's office has been conducting a criminal investigation, but is presumably waiting on the NTSB's findings before making a decision on charges.