Highway Patrol Officer Andy Chan breathing on his own after crash 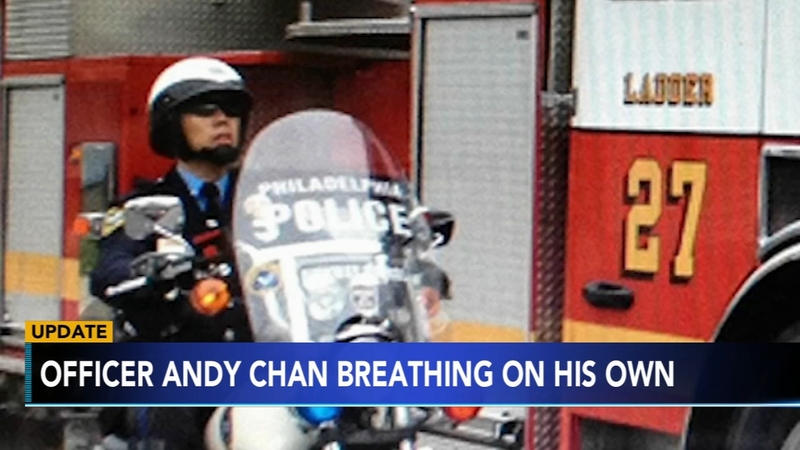 Highway Patrol Officer Andy Chan breathing on his own after crash

PHILADELPHIA (WPVI) -- There is a positive update concerning the Philadelphia police officer who suffered a traumatic injury in an accident last month.

Highway patrolman Andy Chan was successfully weaned off a ventilator Monday and is now breathing on his own.

Action News is told Chan is no longer considered in a coma.

Intensive rehabilitation efforts are being scheduled.

Chan was struck by a minivan in Northeast Philadelphia while on his police motorcycle just after 5:30 p.m. on Thursday, Jan. 3. along a section of Rhawn Street that runs between Roosevelt Boulevard and Frankford Avenue.

Police said the 79-year-old driver of a Ford minivan was coming out of Pennypack Park on to Rhawn Street when he crashed into Officer Chan's motorcycle.

Police Commissioner Richard Ross said he believes, as do the surgeons, that Chan's helmet helped him stay alive.

The driver of the minivan remained at the scene of the accident. Police said the driver was not impaired and there was no sign of recklessness.

Chopper 6 over procession to hospital for injured motorcycle officer in Northeast Philadelphia on January 3, 2019.

Ross said although Chan was headed to his headquarters, he was on his marked cycle, so he would consider him on-duty.

Chan was very active in police recruiting. He was featured in a police recruiting video where he recalled as a boy the police officers who came into his parent's restaurant at 10th and Race streets to get something to eat.

"I said to them, 'I want to become a police officer,'" Chan said in the video.

"You love working with people, you love doing good things for people, this is the best job you could do. It's the best," Chan said in the recruiting video.