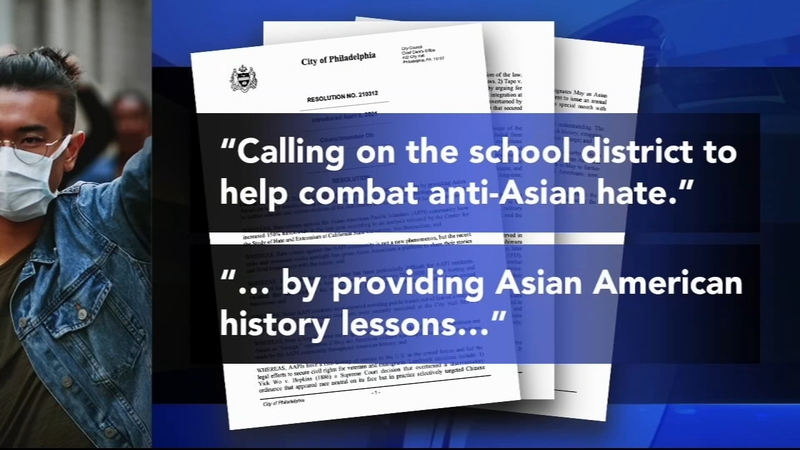 One of the best weapons in the fight against hate is education, and the resolution calls for lessons on Asian American history. Many say this is long overdue.

It's known as the first significant U.S. law restricting immigration, but it was preceded by the Page Act of 1875, which effectively banned entry by so-called "lewd and immoral" Chinese women.

And those were the first of many anti-Asian policies.

"I think it's really important that that gets added into the curriculum," she said.

"Especially during this surging Asian hate that we have in this country," he said. "A lot of it I think comes from just ignorance, misinformation, where Asian Americans have been blamed for many things that they are not responsible for. And it has kind of vilified Asian Americans."

"Going to the Supreme Court, to establish the foundation of civil rights and constitutional rights in this country," he said. "Asian American troops fighting in World War II."

The resolution calls for lessons during Asian American Pacific Islander Heritage Month in May, but McCarthy hopes it will eventually become a more significant part of the curriculum.

"African American history became a mandatory class to graduate school in Philadelphia and I think that's definitely a step in the right direction in diversifying the history that we learn in high school. I would love to see Asian American history be an individual course," she said.

Both McCarthy and Oh said the history of all groups in this country must be taught as a way to understand each other better and find common ground in our past experiences and our hopes for the future.
Report a correction or typo
Related topics:
educationphiladelphiaeducationracismasian americanpoliticsphiladelphia city council
Copyright © 2021 WPVI-TV. All Rights Reserved.
TOP STORIES
85-year-old woman struck by hit-and-run driver in Center City
Murphy, Ciattarelli face off in NJ gubernatorial debate
150 employees leave ChristianaCare due to COVID vaccine mandate
AccuWeather: Coolest Air So Far This Season Moving In
Man hospitalized after being shot 13 times in Philadelphia
Bensalem police warn parents to be on alert during Halloween
Gabby Petito's family speaks as FBI manhunt continues
Show More
Long-lost letters dating back to WWI discovered in Chester County
Child dies from brain-eating amoeba at Texas splash pad
Man found dead in restaurant vent after burglary attempt: Police
200-year-old NJ farm being revitalized by volunteers
Drivers frustrated as traffic returns to pre-pandemic levels
More TOP STORIES News