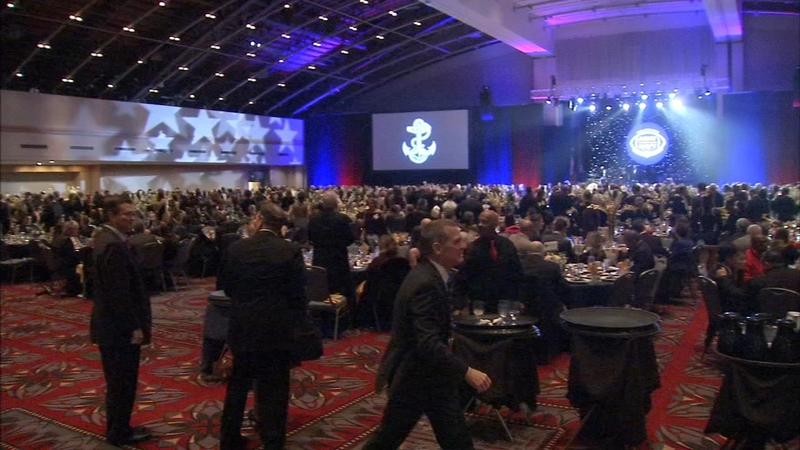 PHILADELPHIA (WPVI) -- It is a fierce rivalry, but Friday night, it's a night to have some fun for the cadets and midshipmen before the Army-Navy game.

As we have seen over the years, the 24 hours before the big game can be just as spirited as the game day itself.

First of all, you're in a city famous for its love of sports, add 50,000 Army-Navy fans and the town is buzzing Friday night.

At the Convention Center tonight, it was the battle of the Army-Navy bands proving that these guys compete in everything.

But that doesn't mean they can't sit together for the Annual Army-Navy Gala with 1200 guests tonight from both West Point and the Naval Academy.

Army and their fans are camped out at the Marriott Hotel, but how did a Navy fan get caught up in the wrong hotel.

"I don't know, I got lost I know," said Amy Treadwell of Houston.

"We're going to convert her into an Army fan," said John Boobas of Athens, Georgia.

"They tried last year and it didn't work," added Amy.

Navy and their fans are camped out at the Sheraton in Center City.

We asked Jana Brown of San Antonio whose going to win tomorrow. She said Navy.

And even though we heard a different story at the other hotel with the Army. Jana said, "Oh noooo, we don't listen to them that's okay," she laughed.

Army-Navy weekend is one of the biggest hospitality weekends each year in Philadelphia.

"The Army-Navy games will bring in about $35 million of economic impact to the city of Philadelphia and then they also expand to the suburbs," said Ed Grose of the Greater Philadelphia Hotel Assoc.

Philadelphia has hosted 88 of 119 Army-Navy games.

Larry Needle of PHL Sports said, "It's a great tradition. There's a special bond between the academies, this game, and this city. It's something that we're incredibly proud of and we think it's gonna be a fantastic weekend."

His mom, Jessi McDuffie is quite proud.

"Extremely. I'm proud of him, and besides that, he goes to West Point, that's the most important thing," she said.
Indeed it is unless you talk to someone whose son, C.J. Williams plays football for the Naval Academy.