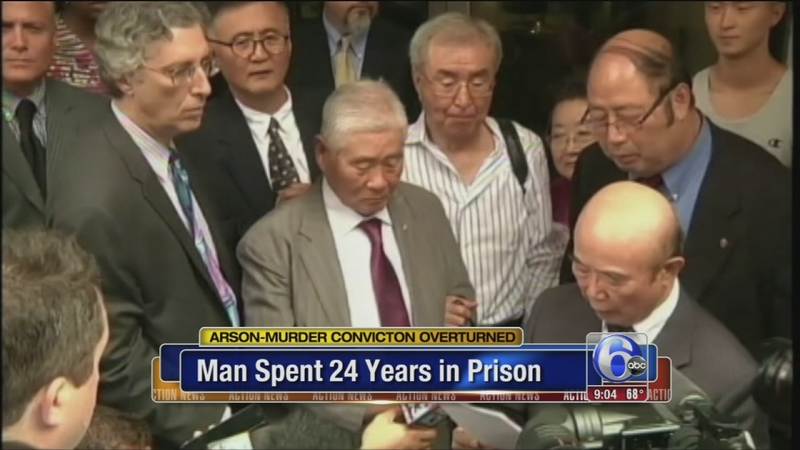 HARRISBURG, Pa. -- A former New York businessman whose arson-murder conviction was overturned in the death of his daughter was freed from prison Friday after 24 years, following a judge's ruling that the case against him was based on now-debunked arson science.

Han Tak Lee, 79, walked out of a federal courthouse in Harrisburg after a judge released him on unsecured bond and restricted his travel to New York, New Jersey and Pennsylvania.

"I'm finally free," Lee told reporters and supporters afterward, in comments translated by an interpreter. "It is difficult to think (of) all the past 25 years ... of my life, even though I was innocent."

He thanked his legal team and supporters, saying he owed them "debts that cannot be repaid except by making the most of my renewed life."

His attorney, Peter Goldberger, said Lee's first stop would be a medical and psychological checkup. He predicted Lee's adjustment to life outside prison will be challenging.

"He needs to gather himself and calm down and think and understand this change in his life," Goldberger said.

U.S. District Judge William Nealon threw out Lee's state conviction and sentence of life without parole this month and gave prosecutors 120 days to decide whether they want to retry him in the 1989 death of his daughter, 20-year-old Ji Yun Lee.

Prosecutors have conceded the arson science used to convict Lee was faulty but insist that other evidence points to his guilt. A county prosecutor plans to seek a review, suggesting it may ask a federal appeals court to overturn the decision to release Lee.

U.S. Magistrate Judge Martin Carlson turned down Lee's request to thank him at the end of the bail hearing. "We are simply doing that which we are required to do," Carlson said.

Carlson said Lee cannot have a guns or a passport and must report any change of address or phone to court authorities.

Though he has spent nearly a third of his life behind bars, Lee - a native of South Korea who became a U.S. citizen about 30 years ago - has never expressed bitterness toward his adopted country and has no plans to return to South Korea, Goldberger said.

Lee is expected to live in an apartment for senior citizens in the Queens section of New York City, where he formerly lived and owned a clothing store.

Lee has long argued that the 1989 fire that killed his mentally ill daughter at a religious retreat in the Pocono Mountains was accidental. In 2012, the 3rd U.S. Circuit Court of Appeals granted his request for an independent examination of evidence. That review, completed in June by Carlson, concluded that "much of what was presented to Lee's jury as science is now conceded to be little more than superstition."

At the time of his trial, investigators were taught that unusually hot and intense fires indicated the use of an accelerant and that arson could be confirmed by the presence of deep charring or shiny blistering of wood as well as "crazed glass," tiny fractures in windows. Research has since debunked these and other notions about arson.

Lee's case is one of dozens around the country to come under scrutiny because of outdated beliefs about how arson can be detected.

Christine could seek to prosecute Lee again, but he has acknowledged it would be very difficult given the passage of time. Lee's supporters expect he will live out his remaining years in freedom.