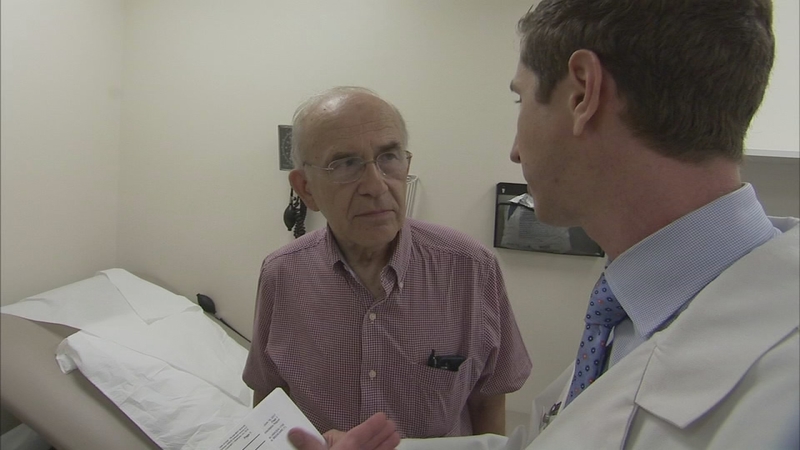 One day last year, Peter Schreck suddenly lost half his field of vision.

"I could see half the line and then i'd have to move my head to see the rest," he recalled.

When it didn't clear up right away, Schreck went to the hospital where tests showed he had a transient ischemic attack, a TIA or 'mini-stroke.'

Doctors also found out he had atrial fibrillation, or AFib, which is when the upper and lower chambers of the heart don't beat together. Blood clots can form in the heart and go to the brain, briefly blocking blood vessels.

"It's kind of like a shot across the bow - it's your body's warning sign that something bigger is coming," said Dr. Matthew Goldstein from Cardiology Consultants of Philadelphia.

To prevent that, Dr. Goldstein of Main Line Health sent Schreck home with blood thinners and an implantable loop recorder in his chest right under the skin over the heart.

"The vast majority of patients forget it's there the first week," said Dr. Goldstein.

But the information it collects is invaluable as it's constantly looking for episodes of AFib.

"It watches every heartbeat of that person, 24 hours a day, 7 days a week," said Dr. Goldstein.

Schreck says he never even feels them.

"When it's irregular, it sends a message saying: 'He's having one of those again!', he said with a laugh.

Schreck's medication can be increased to prevent clotting. He says it's reassuring to know the recorder is watching, so he can enjoy life.

Dr. Goldstein says no one knows how many strokes the recorders may have prevented. But doctors have learned how big a role AFib plays in them.

"We estimated 5 to 6 percent of patients who have strokes like this have AFib. But now that we have these longer-term monitors, we're finding out it's actually 30 percent," he said.