Art of Aging: Veterans adjusting after the war 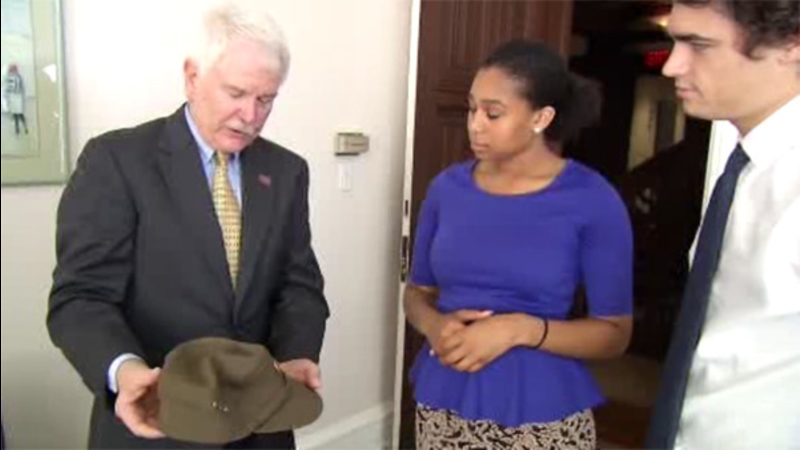 VIDEO: Art of Aging: Veterans adjusting after the war

For many veterans, coming home is a difficult adjustment.

When Dennis Murphy nearly died in battle in Vietnam 45 years ago, he did not get a hero's welcome home.

He said, "When we came home from Vietnam, we were outcasts."

Murphy is now the VP for Enrollment Management of Rosemont College.

So he put his war years behind him, went to college, got his masters and started working in college admissions.

"My goal is to help students pursue happiness," said Murphy.

And a leafy suburban campus would seem a world away from the war in Vietnam. But the past has a way of catching up with us. In the 1980s, a South Vietnamese student came to his office.

He was a boat person, heard that story; "I was moved by it. And then as time went on, more and more South Vietnamese showed up."

"And I'm proud to say, one became a citizen and took my name - Dennis," he said.

But two years ago, Murphy took a job at Rosemont College, and met a student from North Vietnam and her father, who'd also fought in the war.

"I never thought in a million years I would meet a North Vietnamese soldier. And we were in the same area, within 30 miles, maybe closer, at the same exact time," said Murphy.

"And I never thought about the North Vietnamese and what they went through and he was able to share with me some of those challenges that we had. So basically we were all in it together. We were just on different sides," said Murphy.

Neither had ever met anyone from the other side.

"And we really related at a level of brothers in arms against each other," added Murphy.

And each presented the other with their military uniform

"The uniform to someone who's in the military is a badge of honor," said Murphy.

Now the former enemies are friends, and Murphy has made peace with a painful chapter.

"If you don't accept the enemy and move forward, then you live in the past forever," said Murphy.