PHILADELPHIA (WPVI) -- A day after a group of 100 bikers took the streets of Philadelphia in a wild ride, police and local leaders discussed how the situation could have been handled differently.

"Imagine the reckless behavior had we have gotten into a pursuit of them and started chasing them. They all would've went up on the sidewalks. We're talking as rush hour is approaching, obviously kids are getting out of school," Deputy Commissioner Kevin Bethel.

"It was wild, it was dangerous," North Philadelphia resident Gene Morris said.

At a whim, they turned down one street and then another.

In one instance, they cut off a gasoline tanker and weaved through traffic at the intersection.

There were multiple times where they cut off school buses and drove around on both sides of them.

Elaine Stern of Merion, Pennsylvania was in her car at 46th and Lancaster on her way home and got caught up in it. She couldn't move.

"I called 911 and it was very frustrating. The operator kept grilling me and grilling me. Did I see any knives? Did I see this? Did I see that? I kept specifying that I was in my car, I had been surrounded. There's a mob scene, you need to send someone," Stern said.

"Come off like a thuggish type of atmosphere. They run through the red lights. To me it's dangerous," Fred Burton of North Philadelphia said.

It was all supposed to be in memory of 23-year-old Kyrell Tyler aka Dirt Bike Rell.

He achieved local fame for videos he posted on Vine and YouTube performing incredible stunts on his dirt bike.

He was gun down last week while sitting in a car in the 2100 block of South 60th.

Police say he was shot nine times; by whom or why is still unknown.

His funeral was held earlier Tuesday at Broad and Lombard. From there, many of the dirt bikers who saw him as an urban legend decided to do their memorial ride.

"Dirt Bike Rell, you see the whole city loved him. We brought people from everywhere, everybody loved Rell. All over the world," one rider told Action News.

At one point, they did ride by police officers and the police helicopter was tracking them, but no action was taken to stop them. 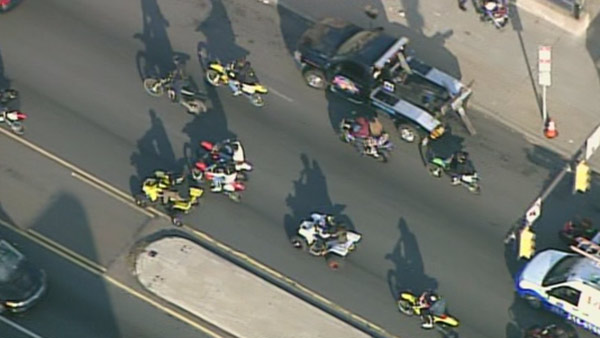 In a statement, police say they were mindful that the men were paying respects after a funeral, but some of the activity was unsafe to them and others.

Police say they are making a push to get these bikes off the street.

It should be noted, these bikes are not legal to drive on streets to begin with.

Police say they have confiscated more than 80 vehicles in recent months, but they must proceed with caution.

"Our goal is to try to get these vehicles, but get them in a manner that does not put us in a place where we're pursuing them and cause them to run over someone," Ramsey said.

"I understand the concern by the police about these high speed chases, but we have to figure out a way," City Council President Darrell Clarke said.

City Hall has been dealing with this ATV, dirt bike situation for more than a decade.

"You see them popping wheelies and leaning back, it's amazing somebody really hasn't gotten hurt," Clarke said.