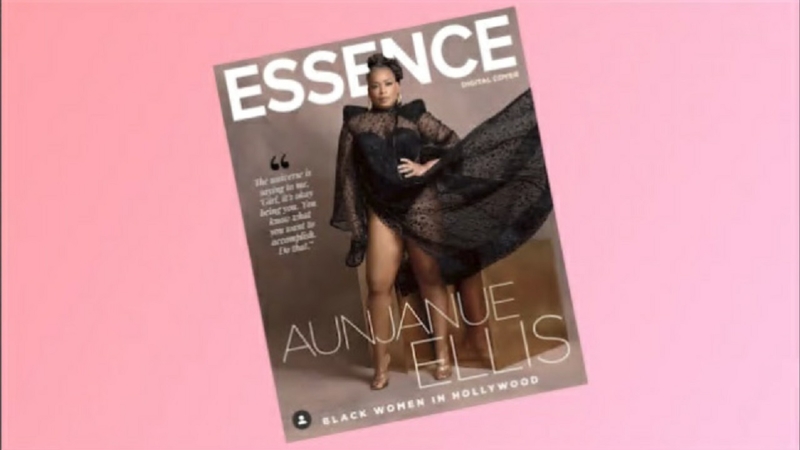 LOS ANGELES, California -- After a more subdued Oscars show last year, Hollywood is looking to party this weekend - back on the red carpet and back in person. It should be 'something to have fun with,' says Oscar Producer Will Packer. However, behind the spectacle lie very real human stories.

A day before the Oscars, everything on Hollywood Boulevard says 'this is a big deal,' but for the nominees, it is even more intense.

Sandy Kenyon has a behind-the-scenes look at the Oscars red carpet.

The "Live" post-Oscars shows has become a tradition, placing Kelly Ripa and Ryan Seacrest in the middle of movies nominated for Academy Awards. Sandy Kenyon previews this year's show.

Ellis is the glamorous toast of the town, recognized by the Motion Picture Academy and by Essence Magazine.

"I'm absolutely rooting for Aunjanue Ellis. You know she is also one of our Black Women in Hollywood nominees this year," said Essence Senior Editor Brande Victorian.

Nominated after Ellis worked to make the mother of Venus and Serena Williams a richer and three-dimensional character.

Ellis was born into poverty.

"My grandmother had to use food stamps to feed me," she says.

The Oscars red carpet is being rolled out for the first time since the COVID-19 pandemic struck just a few weeks after the 2020 Academy Awards. Sandy Kenyon previews this year's event.

Later, she spent decades going from job to job as an actor making a living but hardly was a household name.

"Had completely given up on that. Had made my peace about it and was moving on with my life, when suddenly, two years ago, all that changed," Ellis added.

Now, she is joining her co-star at the Oscars Nominees Luncheon and is wondering how to keep it real on the big day.

"I've been on red carpets before, and I made sure I was saying something that I believed in, you know what I mean? Just things like that," she said.

Ellis says she thinks it is sweeter because it is happening right now after working steadily for so long.

"And I think it is because I had decided that none of this was going to happen at all and I was ok with it. I wouldn't have enjoyed it as much ten years ago, you know what I mean? The fruit wouldn't have been as sweet for me," said Ellis.

So sweet - and win or lose, Ellis is going to savor this moment right now.

It is all the more sweet because the shooting of 'King Richard' had to be shut down during the pandemic and she once feared it will never be able to resume.

"I'm finding myself with my attention on the hearts and the experience of the people around me rather than whether or not my name gets called," she said.

Mark your calendar: March 27 is Oscar Sunday. Special "On The Red Carpet" coverage begins at 1 p.m. ET 10 a.m. PT and continues all day leading up to the 94th Academy Awards ceremony. After the last award is handed out, stay with "On The Red Carpet" for continuing coverage. Be sure to follow @OnTheRedCarpet on Facebook, Twitter, Instagram and TikTok for all your Oscar news and information. Click here to download our CTV apps to watch "On The Red Carpet" wherever you stream.
Report a correction or typo
Related topics:
arts & entertainmentoscarsacademy awardsred carpet fashionactorsandy kenyonotrc
Copyright © 2022 OnTheRedCarpet.com. All Rights Reserved.
OSCARS
Harlem Cultural Festival to return to NYC
Jada Pinkett Smith says her family is 'healing' in 'Red Table Talk'
Will Smith gets 10-year Oscars ban over Chris Rock slap
Glam Lab: Roll out the red carpet for Hollywood waves
TOP STORIES
Police: Triple shooting leaves 1 dead in West Oak Lane
One man dead after West Philadelphia shooting
AccuWeather: Spotty Showers Today
Officials ID 5 killed in Pottstown explosion; most were children
Official admits police made 'wrong decision' in TX shooting
Victim of elementary school attack says it could have been prevented
Police: Store owner robbed, assaulted with brick in North Philly
Show More
Dann Cuellar retires after 34 years at Action News
Another Trenton, NJ firehouse hit by gunfire
Rainy start to Memorial Day weekend at the Jersey Shore
Bank employees help kidnapped woman after she asks for loan
Massacre survivor says gunman told them: 'You're all gonna die'
More TOP STORIES News