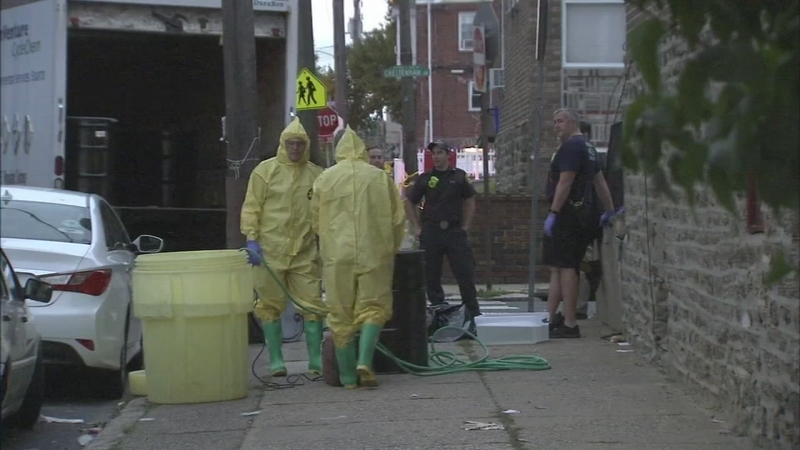 SUMMERDALE (WPVI) -- Authorities say more than one million dollars' worth of suspected heroin was seized and nine men were arrested after a raid at a home in the Summerdale section of Philadelphia on Friday.

Attorney General Josh Shapiro said in a statement on Saturday that between 30,000 and 40,000 bags of suspected heroin were found, along with three to four kilograms of unbagged narcotics.

The nine men, who Shapiro said are from the Dominican Republic, were arrested throughout the house in the 1100 block of Rosalie Street after agents raided the home.

The Office of Attorney General is seeking a $1-million bail for the nine suspects.

"This was a major, and I want to stress major, drug operation in the city of Philadelphia," said Attorney General Josh Shapiro. "I've seen a lot of major operations, and this is the biggest, if not among the biggest, I've seen in my time as your attorney general."

Four Philadelphia police officers and an agent from the attorney general's office were exposed to drug powder in the house, Shapiro said, and experienced "physical reactions."

They were given the overdose reversal drug Narcan as a precaution. All are now recovering.

On Friday night, an environmental services company from New Jersey was brought in to assist. They placed bags of contaminated material into 55 gallon drums that were promptly sealed.

Ultimately, neighbors were thanking city and state authorities for shutting down the major operation plaguing their neighborhood.
"It's just crazy to have to deal with something like this, and people shouldn't have to live like this, and so we're gonna work hard to make sure we improve the situation," Commissioner Ross said.