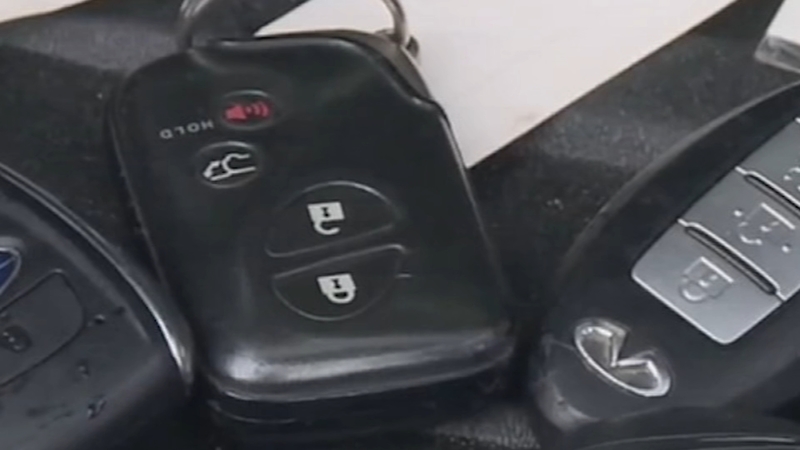 High tech thieves have upped their game by using a "device" which intercepts the signal from your key fob.

It will not only unlock your doors, but will even start the ignition, making for an easy get away.

One Ocean County family said it happened to them and they've shared their story with Action News as a warning.

"It's impossible to think that our vehicle was stolen," said Lisa Cressman.

Impossible? But Lisa Cressman said that's exactly what happened to her on a weekend away in South Florida with her family.

"We valeted the night before and we sent a text down to get the vehicle," said Cressman. "We waited about an hour and the car still wasn't there."

Cressman said all out panic ensued.

Then, the valet manager told her the family's rental car-- a 50-thousand dollar Chevy Suburban -- was gone.

And, it happened all under the watchful eye of the resort's 24-hour valet.

"He had the keys the entire time," said Cressman.

"Today's cars are nothing but computers on wheels," said Morris.

And, they are using what is known as a relay attack device to mimic your key fob.

It works by stealing your cars unique fob code and then sends it to a box like this one, which then takes control.

"It is basically built to intercept the signals from any of those cars that use that kind of technology," said Morris.

To show just how easy this hack is, Morris and his team tested a unit on 35 different vehicles.

And it opened the doors of more than half. In 18 of those cars, the ignition starts and they were able to drive away.

"Imagine having one of these if you are a valet attendant and someone hands you their keys," said Morris. "You steal the signal, open the car, drive off and put the key back on the rack and nobody's the wiser."

Morris says the car hack is on the radar of law enforcement, but can also be hard to prove.

"The only kind of evidence you get from this theft is when it is caught on security camera," he said.

Several car heists were caught on surveillance and posted to YouTube. The video shows how easy it is for the crooks to walk up, hop in, and speed away.

Samy Kamkar is a self-proclaimed hacker.

"Most modern vehicles with keyless entry are vulnerable," said Kamkar. "I would say anyone can create these tools."

Kamkar said vehicles loaded with more electronic features are the most vulnerable.

"It simply has a wider attack surface," he said.

Kamkar, is now using his skill to help car manufacturers fix flaws in the system.

He said because hackers are now working with manufacturers, they should make advancements to make it harder to steal newer models on the market.

The Cressman's rental car was never recovered and their insurance company had to pay out that hefty claim. Which now, will likely raise their rates.