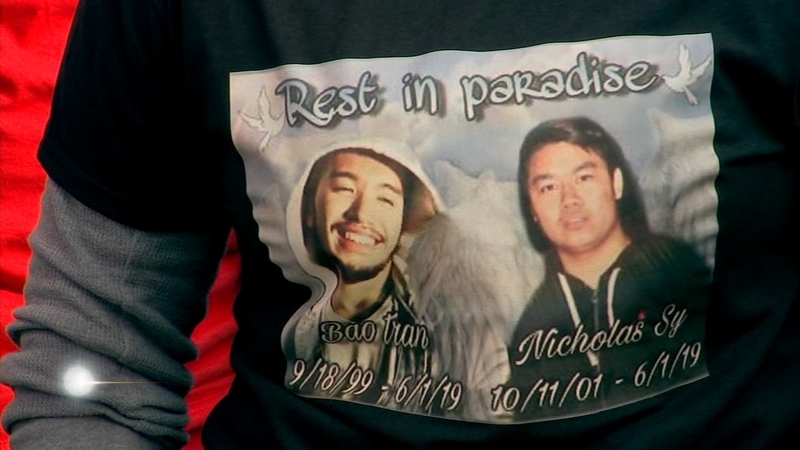 PHILADELPHIA (WPVI) -- We have learned the names of the two teenagers who were killed in a crash on the Roosevelt Boulevard that sent their car off the road and into a house.

The crash happened just before 11 p.m. Saturday in the southbound lanes near Stevens Street.

2 dead in vehicle crash on Roosevelt Blvd. in Oxford Circle. Sarah Bloomquist reports during Action News at 11 p.m. on June 1, 2019.

According to police, a 17-year-old boy and a 19-year-old man were in a white car driving in the outer lanes of the Roosevelt Boulevard near Devereaux Street when they collided with another car.

2 teens killed after being ejected from car in Roosevelt Blvd crash. Annie McCormick has more on Action News at 11 p.m. on June 2, 2019.

The impact of the collision sent their car into a tree before ultimately crashing into a home on the corner of Roosevelt Boulevard and Stevens Street.

Both Sy and Tran were ejected from the car. Police said one was sent into the home and the other landed in the street. Both teens were pronounced dead at the scene.

The passenger in the second vehicle had minor injuries. The driver was not hurt and stayed at the scene.

Neighbors told Action News family members were at the scene of the crash Saturday night.

"The most loving person in the world," they said. "We shared a lot of joy and laughter."

Friends of Tran say he had a passion for cars. Fellow motor car enthusiasts lined up, some playing music during an emotional memorial Sunday night.

"(Bao) was a good guy he was humble," said Nelson Wynder.

"He was so nice to me. He offered to drive me to school if I needed to go to school," said another friend of Bao's.

Police are still early in the investigation but believe at the time of the crash Tran's car was traveling at a high rate of speed.