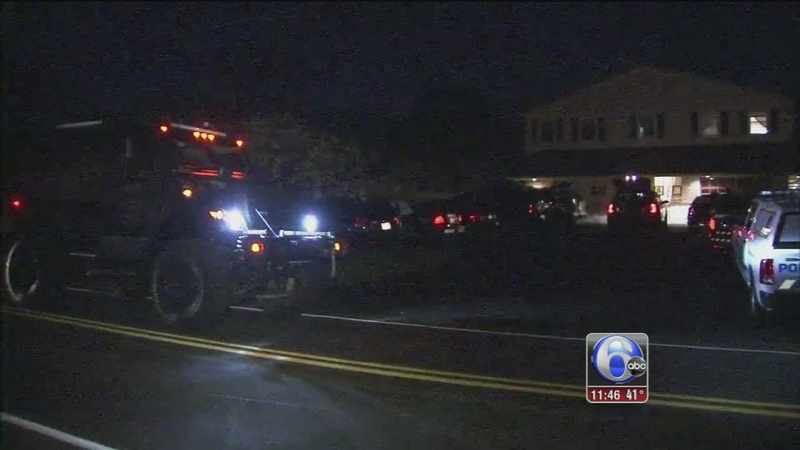 LANGHORNE, Pa. (WPVI) -- Bucks County authorities say a man has been taken into custody after a barricade situation in Langhorne.

JUST IN: Suspect is in custody. No injuries. Peaceful end to 8 hour barricade @6abc

"It was about noontime or so we saw a cop going down the street, and then all of sudden this, all the cars," said Cynthia Bridge of Bucks County.

Neighbors along Hulmeville Road and West Gillam Avenue spent hours on their front yards, watching police and SWAT as they responded to the situation down the street.

"I just got really scared, and I ran over to my neighbor Cindy, and just I thought there was a bomb scare because I saw that the vehicles, the big trucks pulling in," said Chris O'Connell of Bucks County.

Middletown Township police say that around noon Saturday they received a call from the 42 year-old suspect's ex-wife or possibly ex-girlfriend. She was concerned after receiving text messages from him saying he was going to hurt himself.

"Because of the nature of the text messages, and the uncertainty of the situation, they decided it was best to contain the scene and call our SWAT officers in," said Middletown Township Police Chief Joe Bartorilla.

Things quickly escalated after the armed suspect refused to come outside.

"He may have fired a couple of shots from the shotgun out the window in the direction of officers that were stationed behind the home," said Bartorilla.

More than 50 officers, SWAT and medics responded, and armored vehicles were brought out.

"Once he fired the shots, originally we told the residents just to stay in their homes and stay on the ground floor or lower, but once the shots were fired we evacuated the immediate homes surrounding him," said Bartorilla.

Tense negotiations continued through text messaging, but were ultimately not successful. Then the suspect fell silent for more than two hours. Police worried he had harmed himself.

"We actually hit every floor with tear gas, and that didn't get him out of the house, so after that we sent in a robot, which has a camera on it," said Bartorilla.

That's when a SWAT team entered the home and found the suspect.

"He was actually found, I believe, on the second floor rolled up in some carpet," said Bartorilla.

The suspect was taken into custody just after 8:30 p.m.

Police say there is no known motive at this point, but they have not been called out to the home in the past for any domestic incidents.