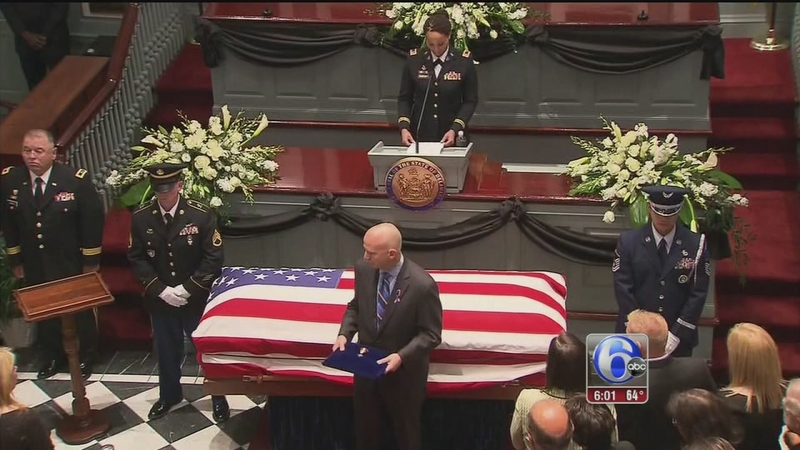 Beau Biden lay in honor in the Senate chamber Thursday afternoon following a processional from Wilmington to Dover. 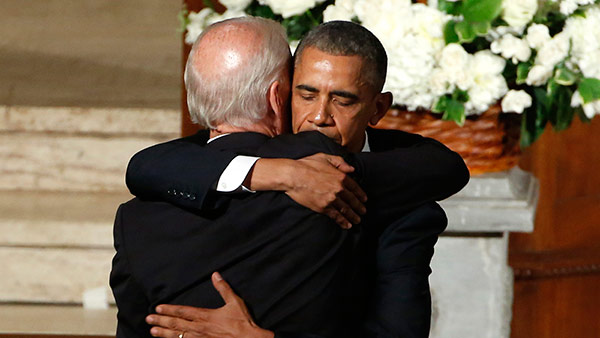 Barricades went up on Thursday morning along the streets near Legislative Hall, and members of the military and law enforcement arrived to set up for the day's event.

When the casket with Mr. Biden's remains arrived, it was carried inside by military personnel. The former Delaware Attorney General was also a major in the Delaware National Guard.

The casket was followed into the hall by the vice president, Jill Biden and other Biden family members, including Beau Biden's widow and two children.

Gov. Jack Markell led the tributes for Biden in a 25-minute service attended by state officials, lawmakers and other dignitaries. Beau Biden's son, Hunter, and daughter, Natalie, clung to their mother, Hallie, and grandmother, Jill Biden, during the service.

Biden was posthumously awarded the Conspicuous Service Cross by Gov. Markell on behalf of the Delaware National Guard.

The Biden family, led by Joe Biden, then stood in a receiving line, warmly greeting well-wishers with hugs and handshakes, punctuated by both smiles and tears, as recorded harp music played softly in the background.

The doors were then opened to members of the public gathered at Legislative Hall, the capitol.

"Beau made Delaware a better place for us all," said Markell, describing Biden as a dedicated public servant and a model husband and father.

Col. Ed Brandt, a Delaware National Guard chaplain, said Biden's life was marked by many accomplishments between "bookends of tragedy."

Biden was 3 years old when he and his younger brother, also named Hunter, were injured in a 1972 car crash that killed their mother and infant sister. The crash occurred just weeks after Joe Biden was elected to the U.S. Senate. Beau Biden's life and political career were cut short by cancer, which first appeared in the form of a lesion discovered by doctors in 2013, three years after he had suffered a minor stroke.

"In my eyes, he proved to be a public servant, not a politician," said former Delaware Chief Justice Myron Steele, who twice gave Biden the oath of office for attorney general.

Action News spoke with some workers from a nearby office who were watching Thursday morning's set-up priority to the start of the ceremonies.

Tammy Jenkins said she hoped to return to pay her respects during her lunch hour.

"Beau Biden particularly, you know, he's a great family man . . . you know, the National Guard . . . compassionate. Today is just a sad day. I mean, your heart breaks for his family. The news was sort of sudden for the public. And it's just heartbreaking, really, for the family."

Airport-style security was in place, meaning sharp objects, umbrellas, liquids and signs were not allowed.

Thursday's services were the first in a series of public commemorations, which include a viewing at St. Anthony of Padua church in Wilmington on Friday, followed by a Saturday funeral Mass at which President Barack Obama will deliver a eulogy. 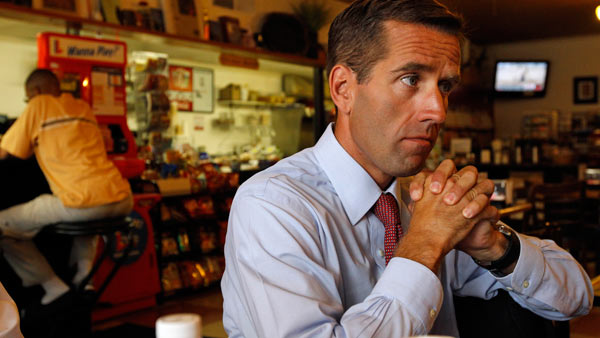 PHOTOS: Remembering Beau Biden
The younger Biden was a lawyer, member of the Delaware National Guard and former Delaware attorney general. He was 46.