WPVI
By Dann Cuellar
BENSALEM, Pa. (WPVI) -- Police in Bensalem, Bucks County say the public has helped identify a man wanted in connection to the theft of large amounts of baby formula from area Target stores.

The suspect, seen in surveillance images wearing a Dallas Cowboys hat, is identified as 25-year-old Anthony Latronica of Quakertown, Pa.

Latronica is described as a white male, 5'6, 185 pounds, with blue eyes, and red hair. Anyone with information on his whereabouts is asked to call police.

"Wow! Thank you for all of the tips. Many of you helped us ID this criminal. We now have a warrant for his arrest," the Bensalem Police said.

On Tuesday, police in Bucks and Montgomery counties released photos of the suspect.

"Took about 12 cans of Similac off a shelf which had a value of about $200, which is about $16 to $17 dollars a can," Bensalem Public Safety Director Fred Harran said.

The very next day, he struck at a Target store in the 200 block of Mill Road in the Oaks section of Upper Providence.

He got into a scuffle with a loss prevention worker before making off with $111 worth of Similac.

"If you know this guy, just don't think it's some innocent guy stealing baby formula for his baby. That's not what's happening here, folks," Harran said.

While it's true the thief could just be out to resell the formula out on the streets, that seems highly unlikely.

"We're finding out now that they're using the Similac, it's a safe item to cut drugs with. They're cutting coke primarily. We haven't seen it with heroin, but you can cut coke, you can probably cut meth with it," Harran said.

Surveillance cameras captured pictures of the man being sought. One camera captured a shot of the red Ford Ranger pickup that he fled in. 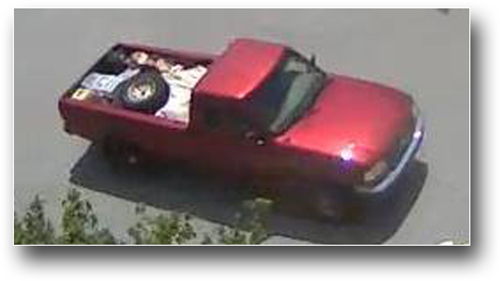 Police say people should not feel sorry for the suspect.

"He's not taking it for his own kid, and we got to remember that. We got to take him off the streets. He's aiding the drug problem that is out of control in the Delaware Valley," Harran said.