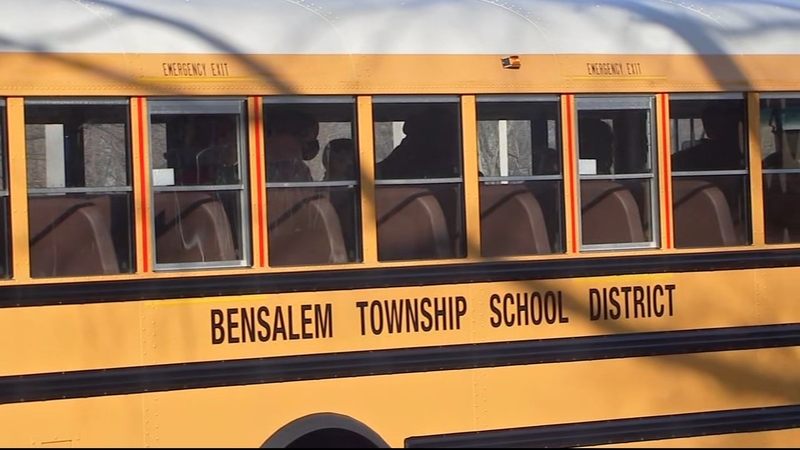 BENSALEM, Pennsylvania (WPVI) -- Monday marks the first day that Bensalem students will be returning to school for in-person learning four days a week.

Many students say they were excited to be back to see their friends, and many parents said they were happy their children were back inside a school.

"It's about time," said Daniel Halpin, the parent of a first and fourth-grader at Russell C. Struble Elementary School in Bensalem.

For months his children were part of the district's hybrid learning where they would attend classes twice a week in person, and he said they were pretty lonely.

"He was the only boy in the class, and he had nobody to play with," said Halpin, referring to his fourth-grade son, Ethan.

Ethan says he counted down the days till Monday, which marked the first day of four days a week in-person classes.

Some classrooms have desks spaced out three feet apart instead of six feet, per the new CDC guidelines.

"There are eight kids in the class before, but now there's going to be sixteen," said Kailyn Halpin, a first-grade student at Struble Elementary School.

The School District of Philadelphia and union officials have announced that another 22 schools will reopen for Pre-K to 2nd-grade students next month for in-person learning.

Many parents Action News spoke with say they felt more comfortable sending their children back to the classroom now that every Bensalem teacher who opted to get vaccinated has received their first dose.

"It was really hard for her to focus at home, so we're hoping that now that she can go to school. It will be much better," said Aisha Ahmed, a parent of a first-grader at Struble.

The school's principal says it's important for primary learners to be taught in-person.

"Especially kindergarten and first, the typing process is a challenge for them," said Lana Judy, the principal of Struble Elementary School.

Teachers will instruct virtually and in-person at the same time which the district's superintendent said is important for everyone to get instructions at their own comfort level.

However, he says around 70% of elementary students have returned for in-person learning.

"Our teachers were just flat out concerned about what they would miss. Sad that they wouldn't be able to shepherd them through the first couple months of their K-12 experience," said Dr. Samuel Lee, the superintendent of Bensalem School District. "And now they're going to have close to that opportunity again."

District-wide, the option of hybrid learning is gone. Now students have two choices, either learning in person four days a week or virtually at home. All schools will be closed on Wednesdays for cleaning.
Report a correction or typo
Related topics:
educationbensalem townshipeducationschoolsschool
Copyright © 2021 WPVI-TV. All Rights Reserved.
TOP STORIES
Canceled Spirit flights cause long lines, short tempers at PHL
Body found in Philly ID'd as missing Bucks County woman
Spotted lanternflies are on the move and spreading out, experts say
Fatal case of West Nile virus reported in Camden County
Rare set of identical triplets born at Penn Medicine
Father of 5 who was waiting out COVID vaccine dies from the virus
Eviction ban ends, but there is money available to help renters
Show More
Street sweepers coming to these 4 Philly neighborhoods
Philly-area counties seeing 'substantial' level of COVID transmission
Philly third-grader bakes to repair playground
Some in Bucks Co. cleaning up from tornado, others from flood
Man sentenced to 2 life terms in 2019 double murder, arson
More TOP STORIES News