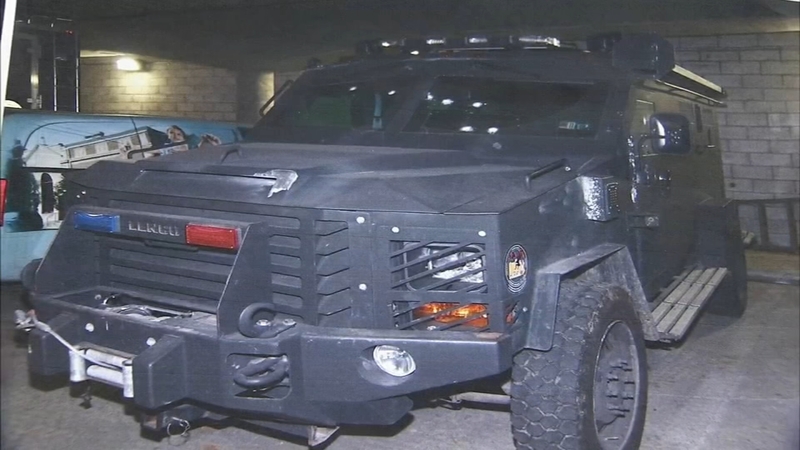 BETHLEHEM, Pa. (WPVI) -- Authorities in the Lehigh Valley are crediting the teamwork of various police agencies and an armored vehicle with saving lives during a deadly standoff in Northampton County.

Police say 36-year-old Justin Kephart killed his mother before taking his own life inside a Bethlehem home.

In a Tuesday afternoon press conference, the Medical Examiner also confirmed Kephart's father was discovered dead two days later in his Lehigh County home. They believe he killed himself.

Officials say around 1:30 p.m. Friday, members of the Bethlehem Township Police Department were called to the 1500 block of Dennis Street for the report of a woman bleeding on the front yard.

The first responding officer, John Meehan, was approached by a neighbor who pointed out the body.

At one point, police say Officer Meehan, not knowing where the shot came from, raised his head, holding his gun in his right hand, and his left hand on the car, when another shot was fired from the house. The bullet flew between the officer's head and his hand, "missing him very closely," police say.

The officer remained in that seated position for over an hour until the arrival of a BearCat rescue vehicle from the City of Bethlehem.

Officers say the BearCat has windows that are ballistic proof and the plating protects itself from certain caliber ammunition.

The BearCat, with two Bethlehem police officers inside, picked up a Pennsylvania State Police Trooper and a Bethlehem Township officer while it worked its way toward the standoff scene.

The driver of the BearCat was able to maneuver down the street and rescue Officer Meehan with the help of Pennsylvania State Police. Upon entering the BearCat, Officer Meehan informed those inside of the neighbor taking cover nearby. They were then able to rescue her.

Officials say the BearCat took at least 26 shots during the incident.

"It did do its job and saved officers' live and civilian lives." Bethlehem Police Chief Mark DiLuzio said.

Neighboring police agencies responded to the scene until the Pennsylvania State Police Special Emergency Response Team took over the situation.

Negotiators attempted to make contact with the suspect, identified as Kephart.

According to police, Kephart called a family member saying he shot his mother and fired at police.

Police declared a "critical situation" and residents were told to shelter in place.

Police say at different points, Kephart fired at vehicles and equipment occupied by members of the police force.

Police say around 10 p.m., officers were able to see Kephart lying motionless in the basement. They entered the home and determined Kephart had died due to an apparent self-inflicted gunshot wound to the head.

The shelter in place order was soon lifted.

While searching the home, police found Kephart had access to two Russian assault rifles and a 12 gauge semi-automatic shotgun. On the first floor, police recovered 14 spent rifle casings. In the basement, 100 spent rounds were found scattered about chairs.

Police say Kephart was not legally permitted to possess a firearm due to a prior criminal record. They say his father had an extensive firearm collection and they believe that is where he obtained the weapons.
The victim, who was pronounced dead at the scene, has been identified as 62-year-old Marylouise Meixell-Moyer. Police say she is the mother of Kephart.

The home where the incident took place belonged to Meixell-Moyer's mother. Police say Kephart lived in the home and his mother would occasionally also stay there, as well.

The Medical Examiner says Meixell-Moyer sustained 11 gunshot wounds and the cause of death ruled a homicide.

Kephart died as result of single gunshot wound to the head. His death was ruled a suicide.