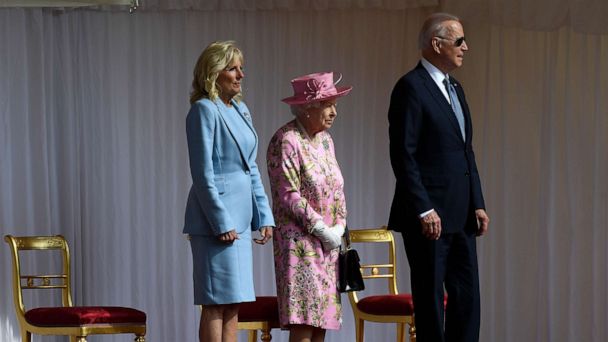 President Joe Biden and first lady Jill Biden visited Windsor Castle Sunday afternoon, where Queen Elizabeth II welcomed them on the dais in the castle's quadrangle and the president inspected the guards.

After Marine One touched down on the lawn by the castle, the Bidens and the queen then stood on the dais while the "Star Spangled Banner" played. Biden wore his familiar aviator sunglasses during the outdoor event.

Biden then walked onto the quadrangle and inspected the guard -- without his aviators.

The president returned to the dais and after the troops marched past, the Bidens and Elizabeth exited the dais and they went inside the castle to have tea privately.

About an hour later, the Bidens left Windsor and climbed aboard Marine One.


The president told reporters on the tarmac at London Heathrow later that the queen reminded him of his mother and that he invited her to the White House. Biden described Elizabeth as "extremely gracious," and said that they "had a great talk."

The first lady was next meeting with United Kingdom veterans who participated in Walk of America, a 2018 expedition led by Walking with the Wounded. She had served as the patron of this event.