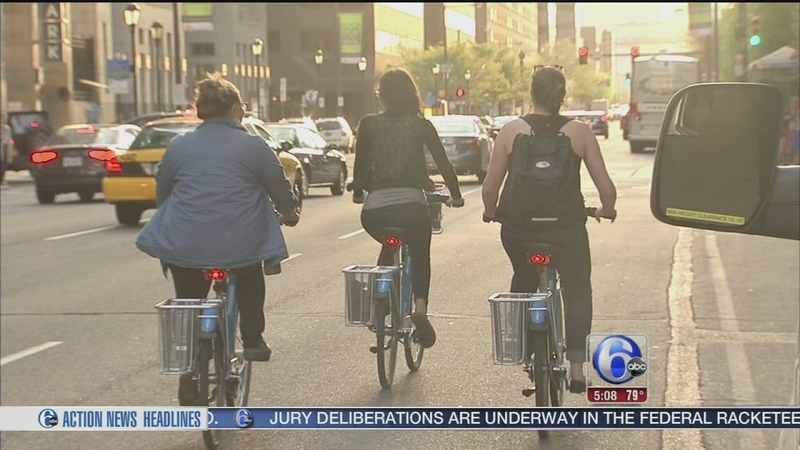 PHILADELPHIA (WPVI) -- Warmer weather brings out more bicyclists, so it's important to remember the rules for sharing the road.

Recently, we've had two incidents where riders were hit by cars, killing one biker.

This weekend 26-year-old filmmaker Jay Mohan was killed riding his bike on Girard ave. Last month Temple student Rachel Hall was seriously injured after being struck by a car near the Campus.

In Philadelphia there are on average 500 reportable bike accidents each year.

For motorists it is important to know how to treat Bikes. The law says a bike is a vehicle and must be treated as such.

"If a driver is in the road and there is a bicyclist ahead of him and there's no place safely to pass, the driver has to yield the right of way. And if they're passing, they have to leave according to state rules, 4 feet," said Bob Previdi, Bicycle Coalition of Greater Philadelphia.

But cyclist Tyree Carter of South Philadelphia says motorist are not always watching.

Drivers respond that there are cyclists that don't follow the rules.

"Some cyclists go thru lights and then you never really know which way to look for them and you don't want to hit someone, God Forbid," says Jillian Smith from West Philadelphia.

In addition, many cyclists don't wear bright, reflective clothing or use lights.

Cyclists and Drivers have an uneasy co-existence.

The hope of the Bicycle Coalition and the city is improved separation if possible - an example is the 9-foot wide bike lane along Spruce street.

"The same number of cars used that road today as used it three years ago. We took out a lane of traffic away and we have a bike lane on there now. Crashed are down 25% - that's a huge success," said Previdi.

But there are still difficulties. Too often cars and trucks use the bike lane for parking.

The Bicycle Coalition are working with the parking authority to try to reduce that problem.

The Coalition is trying to change the culture in Philadelphia between how drivers deal with cyclists and vice versa.

At this point, many people in Philadelphia are using bikes on a regular basis - more than 14,000 people commute to work more than 3 days a week on their bicycles.