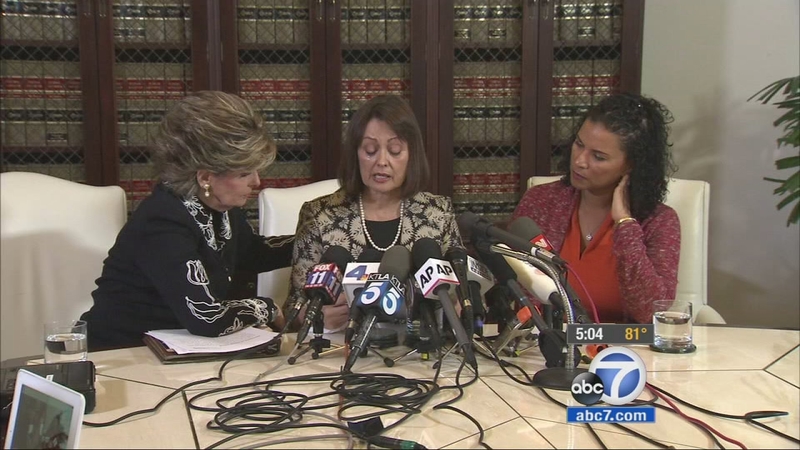 In a news conference with their lawyer, Gloria Allred, they offered details similar to what 30 other alleged victims have described.

Lise-Lotte Lublin says she was 23 years old in 1989 when he gave her two drinks that caused her to black out.

"Bill Cosby appears to think that rape is a joke. Let me tell you something Bill. I am not laughing," Lublin said.

Linda Brown says Cosby assaulted her in 1969 as she was breaking barriers in television. She modeled the Wonderbra in a commercial. It was the first time underwear was shown on a woman instead of a mannequin.

Brown in tears said of the alleged assault, "This horrible experience has had a long lasting impact on me."

The two women came forward as Cosby was set to perform his "Far From Finished" show in Bakersfield Thursday night. The show is off for now, he says because of a scheduling conflict.

In an open letter to fans he said, "Don't forget I said Postponed. Hey hey hey - I'm Far From Finished."

Lublin says she is pushing an online campaign in Nevada, urging supporters to sign up on change.org and extend the statute of limitations for sexual assault.

For almost all of Cosby's accusers, it is too late to seek criminal charges or pursue a suit in civil court.

Allred says she has proposed alternatives to Cosby's lawyers to allow the alleged victims a face-to-face meeting. She says the offer was rejected.

"Mr. Cosby thinks that this will soon be over and that no more women will come forward. He is very wrong," declared Allred.

She is urging more protests at his "Far From Finished" shows, saying that she and the accusers are not finished either.