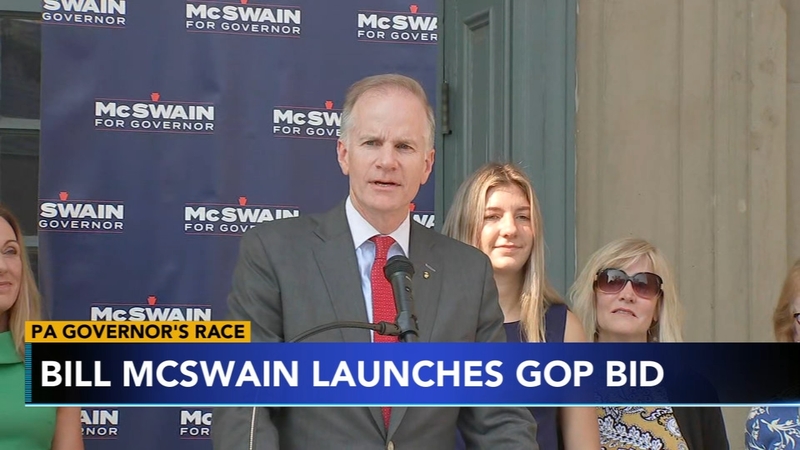 HARRISBURG, Pennsylvania -- Bill McSwain, the top federal prosecutor in Philadelphia under former President Donald Trump, will run for Pennsylvania governor, he announced Monday, joining a crowded Republican field that may still yet get bigger.

McSwain's announcement - his first run for public office - was not a surprise.

He had written to Trump in July, seeking the former president's endorsement for governor and, before that, had told party figures for months that he intended to run.

In a campaign video, McSwain took on Democratic Gov. Tom Wolf's handling of the pandemic, saying "we will have no forced closings and no state dictates" and otherwise sounded familiar Republican notes on culture war issues, cutting taxes and "law and order."

He leaned heavily on his background in law enforcement and service in the U.S. Marine Corps.

"I will fight with all the commitment I learned as a Marine and a prosecutor to restore law and order, freedom and economic opportunity," he said.

McSwain, 52, lives in Chester County and went back to private law practice after more than three years as the U.S. attorney for the eastern district of Pennsylvania, which includes Philadelphia. He also served several years as an assistant U.S. attorney in Philadelphia when George W. Bush was president.

He also has worked for two large Philadelphia-based law firms - Drinker Biddle & Reath and, currently, Duane Morris - and has degrees from Yale and Harvard.

McSwain has tried to make the case that he is best positioned to beat the Democrats' likely nominee, state Attorney General Josh Shapiro.

His backers like to point out that Republicans in Pennsylvania have a tradition of nominating candidates for governor who are former prosecutors, including three - Dick Thornburgh, Tom Ridge and Tom Corbett - who got elected.

However, he will first have to get through the Republican field, which includes former U.S. Rep. Lou Barletta, the former four-term congressman who was the party's nominee for U.S. Senate in 2018, and Charlie Gerow, who runs a communications and marketing firm in Harrisburg and is vice chair of the American Conservative Union.

McSwain is coming off an episode in July where Trump - speaking at the Conservative Political Action Conference in Dallas - said he had a letter from McSwain that claimed that Trump's attorney general, Bill Barr, would not let McSwain investigate voter fraud in last November's presidential election.

McSwain's letter said he was given a "directive to pass along serious allegations to the state attorney general for investigation."

Barr denied to The Philadelphia Inquirer that he ordered McSwain not to investigate allegations of election fraud, and said McSwain only made the claim to curry favor with Trump.