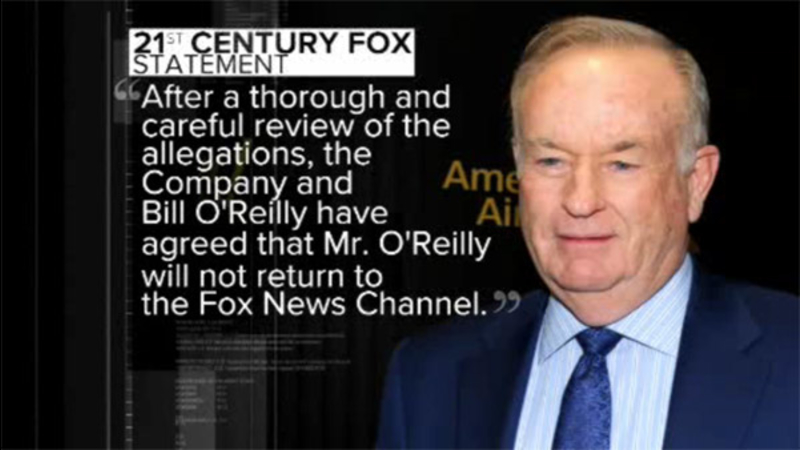 Fox News Channel's parent company fired Bill O'Reilly on Wednesday following an investigation into harassment allegations, bringing a stunning end to cable television news' most popular program and one that came to define the bravado of his network over 20 years.

Over the past 20 years at Fox News, I have been extremely proud to launch and lead one of the most successful news programs in history, which has consistently informed and entertained millions of Americans and significantly contributed to building Fox into the dominant news network in television. It is tremendously disheartening that we part ways due to completely unfounded claims. I will always look back on my time at Fox with great pride in the unprecedented success we achieved and with my deepest gratitude to all my dedicated viewers. I wish only the best for Fox News Channel.

O'Reilly lost his job on the same day he was photographed in Rome shaking the hand of Pope Francis.

The downfall of Fox's most popular - and most lucrative - personality began with an April 2 report in The New York Times that five women had been paid a total of $13 million to keep quiet about unpleasant encounters with O'Reilly, who has denied any wrongdoing. Dozens of his show's advertisers fled within days, even though O'Reilly's viewership increased.

Following the Times story, 21st Century Fox said it had asked the same law firm that investigated Ailes to look into O'Reilly's behavior. 21st Century Fox leaders Rupert Murdoch and his sons Lachlan and James said in a memo to Fox staff that their decision to ax O'Reilly came following an "extensive review" into the charges.

"We want to underscore our consistent commitment to fostering a work environment built on the values of trust and respect," the Murdochs said in a memo to Fox News staff members.

Fox said Tucker Carlson would move into O'Reilly's time slot - the second time in three months he's replaced an exiting prime-time personality. Carlson, a veteran pundit who has hosted shows on CNN, MSNBC and PBS, had taken over for Megyn Kelly in January when she announced she was moving to NBC News. "The Five," a talk show with five rotating hosts that regularly airs at 5 p.m. ET, will move into the 9 p.m. time slot. Eric Bolling will host a new show that airs at 5 p.m. starting next month, the company said.

O'Reilly had ruled the "no spin zone" on television with a quick smile and an even quicker temper. He pushed a populist, conservative-leaning point of view born from growing up on Long Island, and was quick to shout down those who disagreed with him. Fans loved his willingness to talk back to power or point out hypocrisy among liberal politicians or media members.

His show generated $178 million in advertising revenue in 2015, according to Kantar Media. His audience was larger in the first three months of this year than it has ever been, according to Nielsen.

O'Reilly's pugnacious personality wasn't just an off-screen affectation, with one of the settlements going to a woman who complained about being shouted at in the newsroom. Even though at least one of the harassment cases against him dated back more than a decade and was widely reported then, the accumulation of cases outlined in the Times damaged him much more extensively. For Fox executives, it wasn't clear when it would end: a campaign to target advertisers was continuing, a group of women demonstrated in front of Fox's headquarters Tuesday and another woman, a former clerical worker at Fox, called a harassment hotline and accusing the host of boorish behavior.

"I'm not going away," said Lisa Bloom, attorney for the latest accuser and another woman who alleges her career stalled because she spurned O'Reilly's advances.

O'Reilly's attorney, Marc Kasowitz, charged that his client was being subjected to a "brutal campaign of character assassination" and that there is a smear campaign orchestrated by far-left organizations bent on destroying O'Reilly for political and financial reasons.

Conservative personality Glenn Beck - who once lost a job at Fox News Channel because a similar campaign choked his program of paying advertisers - came to O'Reilly's defense of Wednesday, but it was too late. O'Reilly's fans aren't likely to be happy about his losing his job, particularly on a controversy set in motion by the Times, a publication hated in conservative circles.

O'Reilly had been scheduled to return from his vacation next Monday, and there had been some talk of him addressing his longtime viewers about the exit. But Fox said Wednesday that wouldn't happen.

O'Reilly is also one of the country's most popular nonfiction authors. The books in his "Killing" historical series, including "Killing Lincoln" and "Killing Reagan," have consistently sold 1 million or more copies in hardcover, a rare achievement in publishing, and his platform on Fox enabled him to promote his work. He has also had best-sellers with everything from the memoir "A Bold Fresh Piece of Humanity" to his most recent work, "Old School," which includes passages urging the respectful treatment of women.

O'Reilly and co-author Martin Dugard are due to release another book in the "Killing" series in September, and a spokeswoman for publisher Henry Holt and Co. said that plans had not changed.

Vatican spokesman Greg Burke confirmed O'Reilly was in the VIP section for the pope's Wednesday appearance. Burke, a former Fox News correspondent in Rome, denied having facilitated the tickets. Such tickets can be obtained via special request to the papal household from embassies, high-ranking churchmen or Vatican officials.

Francis always swings by the VIP seats at the end of his audience for a quick round of handshakes. A photographer from the Vatican newspaper L'Osservatore Romano snapped a photo of Francis reaching out to shake his hand.
The following internal memo was sent to Fox News Channel employees on Wednesday:

"We'd like to address questions about Bill O'Reilly's future at Fox News. After a thorough and careful review of allegations against him, the Company and Bill O'Reilly have agreed that Mr. O'Reilly will not return to the Fox News Channel.

This decision follows an extensive review done in collaboration with outside counsel.

By ratings standards, Bill O'Reilly is one of the most accomplished TV personalities in the history of cable news. In fact, his success by any measure is indisputable. Fox News has demonstrated again and again the strength of its talent bench. We have full confidence that the network will continue to be a powerhouse in cable news.

Lastly, and most importantly, we want to underscore our consistent commitment to fostering a work environment built on the values of trust and respect.

AP writers Nicole Winfield in Rome and Hillel Italie in New York contributed to this story.