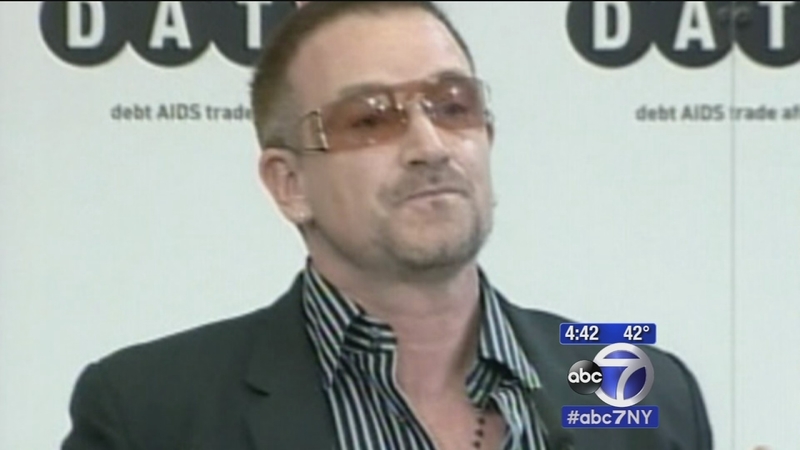 Bono says he may never be able to play guitar again

LONDON -- U-2 frontman Bono who was badly hurt in a bike crash in November in Central Park said he is working to recover in time for the band's upcoming tour.

The performer told magazine "Rolling Stone" that he is battling to be ready for the tour's first stop in Vancouver in May.

The bike crash left him badly hurt, wondering if he would ever be able to play guitar again. He said he's still working on his left side-- but his right hook is quote "ready to rumble."

At the time, Bono said he may never play guitar again due to his injuries. The singer suffered multiple injuries, including fractures to his left eye socket, shoulder blade and left elbow, when he crashed his bike in Central Park.

In the song 'With or Without You', the lyrics include "Sleight of hand and twist of fate", and fate in the form of a bad accident meant extensive surgery to his hand.

But Bono's voice, one of the most distinctive in all of rock, hasn't been silenced, and after extensive surgery he's healthy enough to write a blog post of more than 6,000 words.

Bono was injured riding his bike in Central Park on Nov. 16; at the time, he wrote:

"Recovery has been more difficult than I thought...As I write this, it is not clear that I will ever play guitar again. The band have reminded me that neither they nor Western civilization are depending on this."

In the aftermath of the accident, Bono required a new titanium elbow and he posted an x-ray of it "for a laugh", as he puts it.

Bono blames only himself for what was described as a high energy bike accident that reportedly occurred when he tried to avoid another rider, but he offers no new information about how the crash came about, writing that he: "Blanked out on impact and have no memory of how I ended up in New York Presbyterian with my humerus bone sticking through my leather jacket. Very punk rock -as injuries go."

Despite his many other injuries to his hand, shoulder and face, Bono said the principal hurt came from the injury to his Irish pride after it was discovered he was wearing Lycra shorts under his track suit, Bono adding lycra "is not very rock and roll". The rocker makes fun of himself throughout.