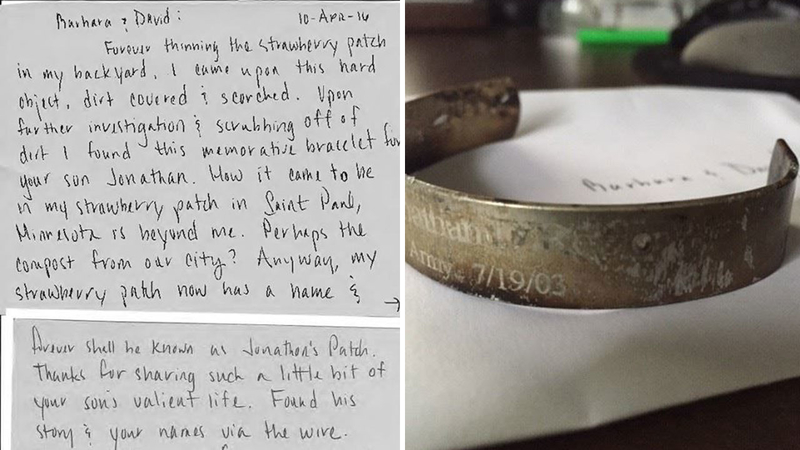 KATY, TX -- A mother in Katy, Texas discovered quite the surprise in the mail this weekend. Barbara Rozier opened a package addressed from a woman in St. Paul, Minnesota.

Rozier discovered a note and commemorative bracelet about her late son. Jonathan Rozier was killed in 2003 while serving overseas in Iraq.

The note addressed to his parents read...

"Forever thinning the strawberry patch in my backyard. I came upon this hard object, dirt covered, & scorched. Upon further investigation & scrubbing off of dirt, I found this memorative bracelet for your son Jonathan. How it came to be in my strawberry patch in Saint Paul, Minnesota is beyond me. Perhaps the compost from our city? Anyway, my strawberry patch now has a name & forever shall be known as Jonathan's Patch. Thanks for sharing such a little bit of your son's valiant life. Found his story & your names via the wire. Thinking of you, all best to your family - Annette.

P.S. Those strawberries are fantastic!"

Barbara Rozier said she knows the name of the woman who sent the package. However, Rozier doesn't recall ever seeing the bracelet and doesn't know who would have been wearing it.

"I've never seen this before. I thought it was interesting. It was in St. Paul, Minnesota. We've never been there. We don't know anybody there. I would love to know the story behind the bracelet," said Barbara Rozier. "I unwrapped the package. It was his name, rank, Katy, Texas, arm, and the date he was killed. It was in pretty bad shape."

Rozier is hoping someone out there can help solve the mystery.