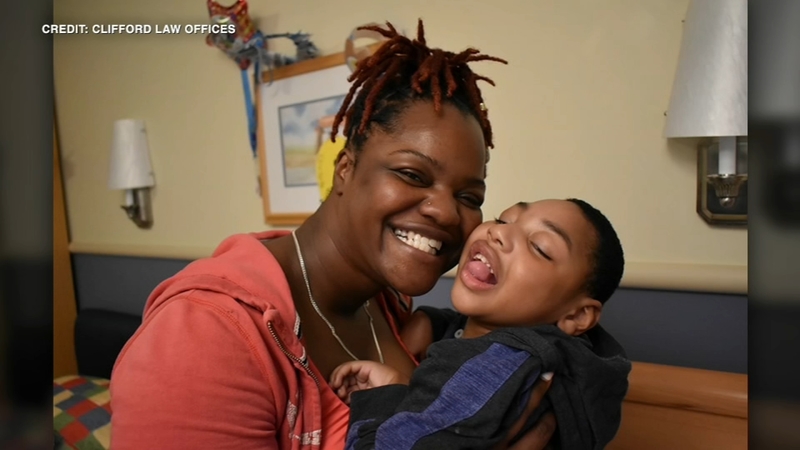 OAK PARK, Ill. (WPVI) -- A Cook County jury has awarded a family a record-breaking $101 million after a baby was born with brain damage at West Suburban Medical Center in Oak Park.

Tequila Snow said she will feel an overwhelming sense of relief when she kisses her 5-year-old son Tuesday night.

"We have waited a long time for this day," she said. "Even though Gerald can't talk in the same way as us, I wanted his voice to be heard."

Gerald can smile and squeal, but he cannot speak. Or eat. Or even sit up on his own. In his five years of life, he never has.

"All because of what he went through and not getting help when he needed it," his mother said.

The judge ruled Tuesday that Gerald is permanently damaged directly because nurses and technicians at West Suburban ignored his mother's cry for help.

Gerald has been cared in an inpatient facility for the past year, after his mother was no longer able to stay home to care for him herself.

On August 16, 2014, Snow showed up at the hospital panicked because she could no longer feel her unborn baby moving.

"When they did the ultrasound he wasn't moving and they didn't report that to a doctor," said Sarah King, attorney with the law firm who represented Snow. "From there five hours of delay ensued, and there was absolutely no excuse for five hours of delay."

By then it was too late.

"When he was born he was limp, pale, not breathing. They had to resuscitate him," King said.

Snow relived every second of that horrifying day over the course of the month-long trial that recently concluded. The jury awarded Snow, who is a single mother, more than $100 million to make sure Gerald is cared for at home, forever.

"He is all I have and I am going now to let him know he is coming home very soon," she said.

West Suburban Medical Center has not responded to a request for a comment.